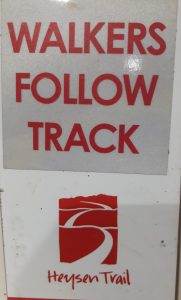 The Heysen Trail reopens with the end of the Fire Danger Seasons.

The end of the Fire Danger Seasons in the Mid North and Mt Lofty regions on April 30th 2021, heralds the reopening of the Heysen Trail south of Wirrabara.

The trail north of Wirrabara reopened on April 16th following the end of the fire bans in the Flinders region.

Walkers note the following changes to the trail:

Forestry SA have given approval for the reopening of the section of the trail affected by the Cudlee Creek fire in December 2019.

The trail markers destroyed in the fire were replaced this week and the trail is now ready for walkers.

The trail closure notes previously included in Walk Selector – Section 14 have been removed:

Our Trail Development team is still working with Forestry to determine whether Grandpas camp is safe for use. In addition to the risk of falling trees, while the rainwater tank survived the water it was affected by ash. At this stage the camp remains closed and may do so for sometime yet.

The basic hike-in site installed by Friends of Heysen volunteers is having a major upgrade with construction underway from May to July 2021.

An interim site is being established by Parks SA in the same area but closer to the road. This remains a free site with water tank for use by Heysen through hikers. Please note the tank water may be limited although the creek is currently flowing.

The Heysen Trail route is not affected.

DEW has advised that following further consultation with landholders concerning the Bundaleer Greenway,  the following re-route has been reversed and the Heysen Trail has returned to the original route heading north west of Curnows Hut via New Campbell Hill.

Following the Bundaleer bushfire in 2013, the SA Government reviewed its tenure of the affected forestry plantations. Some of the land traversed by the Heysen Trail was transferred to private management.

As a result, the Heysen Trail has been re-routed considerably in this area. The new route over public land now involves an additional 22 kms.  The previous direct route from Curnows Hut to New Campbell Hill is on private property and access is no longer permitted.

The Department for Environment and Water has advised the Friends of Heysen Trail that the new trail has been marked and is now accessible to walkers. The new trail route is shown in the following link: – Bundaleer re-route of Heysen Trail

and added to the re-route page of our website: – Bundaleer Greenway re-route

The Heysen Trail is closed between Bowman Park and Hughes Gap.  The Friends of Heysen Trail volunteers are working with Pt Pirie Council to develop an alternative route.

The new Bowman Park -Huddleston route has been finalised and is open to walkers. The re-route was published on our website on 21 May 2021.

The re-route will be added to the next version of the Heysen Trail gpx file and Interactive map which we expect to issue in a few months.