The 32nd Annual General Meeting of the Friends of the Heysen Trail and Other Walking Trails Inc. will be held at 7.30 pm on Friday March 22nd 2019. The venue will be the Woodville Lawn Bowling Club, Oval Avenue, Woodville.

Nominations are sought from you, our members, for election to the Friends Council at the AGM, for positions including Vice President, Secretary, Treasurer and half the remaining members. Our Constitution calls for not less than four and no more than ten non office-bearing members. 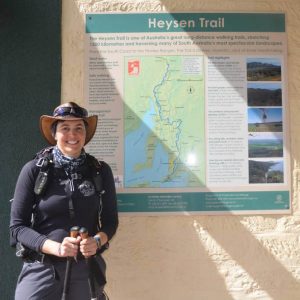 Our guest speaker will be Briony Ankor, who, in 2018 hiked the Heysen Trail solo using this challenge to raise funds and awareness of Narcolepsy.

Hear about our Association’s activities in 2018 and plans for 2019.

Meet your council (they are the people who make the decisions) and find out what we intend to do to further develop, maintain and promote the use of the Heysen and other walking trails.

View further information about when Council meetings are held and the role of a Councilor. Download the Nomination Form for Council.

Any member wishing to move a motion at the AGM should be aware of the Constitutional requirements:

‘Notice of any such motion proposed to be moved at a General Meeting by any member not being a member of the Council shall be signed by the proposer and seconder and shall be delivered to the Secretary at least seven days before the meeting. No motion moved by any member other than a member of the Council shall be entertained by the meeting unless notice thereof has been given as aforesaid.’

Magazine of The Friends of the Heysen Trail, view the latest issue - August 2021 or past issues.