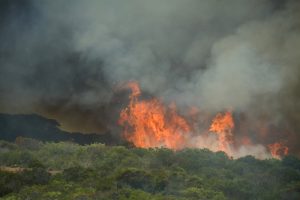 The Country Fire Service  (CFS) has now announced the full set of dates for the 2020/21 Fire Danger Season.

The fire danger season for the Mt Lofty District (that is the trail south of Tanunda) will commence on 1st December and continue through until midnight on 30th April 2021.

Closure of the Heysen Trail over the Fire Danger Season

This section of the trail is now closed until April 15th 2021.

The Mid North District includes the trail north of Tanunda  and south of Wirrabara. The Heysen Trail between these locations will close on 15th November  2020 and reopen on 30th April  2021.

As indicated above the Heysen Trail will reopen during April/May 2021.

If you want to walk on the trail, check which Fire District you will be in. You will find the Fire Districts listed on the Fire Danger Season page and shown on the Interactive Map on the Friends website.