A true business person always rings for an appointment before calling on the Manager of a company with whom they wish to do business, usually with a hint of something really beneficial to that business.

This article was written for The Trailwalker by George during his illness and was completed in March 2007.

So it was sometime in 1990 when George Driscoll, the Manager of the Scout Outdoor Centre received a visit from a well presented gentleman, Neville Southgate, President of the Friends of the Heysen Trail.

Neville’s proposal was that the Scout Shop should sponsor a bush-walking program with the Friends providing the Leaders. There was to be no financial commitment from the shop other than handling bookings and promotion. The idea was to get a new group of people walking on the Heysen and other trails to discover the enjoyment group walking can bring.

George felt that this was the basis of a good idea. However, always wanting to be in full control he felt that the leaders should be paid staff members of the shop rather 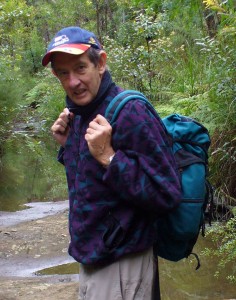 than relying on volunteers from another organization. George realized that there might be a great deal of good will generated for the Scout Shop through its friendly staff members. When new walkers needed gear they would know where to get it through the personal contact made on the walks. Thus the Pathfinders program began.

George remembers the first walk led by Scott on the coast near Inman Valley. It was a long enough walk and some of the party including George appeared to be wilting a bit. Scott, ever the good leader suggested, “We can take a short cut here or take the longer way back, what do you think?” George favoured the short cut but up piped Kay, then on an early date with Ian, “Lets take the long way!”

The Pathfinders first weekend away in 1991 was at Riverton. Eager participants travelled by bus on Friday night. Accommodation was booked at the two small Hotels. Well known Friends walkers Terry and Francis, Colin and Marlene, Terry and Val, Ian and Kay, George and Elfi met therefore the first time as Pathfinders and are still good friends. They all regard that weekend at Riverton as something special in their lives. One thing we all remember is that our Leader Barbara, that effervescent little bundle of energy, could eat so much!

Darren, who arranged a wonderful array of walks, led the first Pathfinder trip to Tassie. Daryl, our host at Lemonthyme Lodge stopped the bus on the road to the Lodge to chat for some 5 minutes to another driver. “This is a bunch of South Australians I’ve got here in the bus.” This introduction to “Tassie Time” set the mood for a great walking holiday. It was the first walking trip for Liz who now leads many walks for the Friends.

Other prominent Friends who started out with the Pathfinders are David and Ralph, Maintenance Section Leaders. Dr Terry established the protocol for first aid requirements for Heysen walk leaders and walkers. Then there is the “Walking Mafia”, Darce, Lorraine, Marguerite, Chris and Norma. They enjoyed many Pathfinder Canoe trips led by Tim, who gave them their name as they always ganged up against him! Now they help in the Friends office. 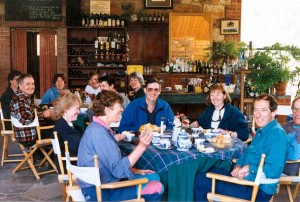 Imagine spending the night out on a tractor, with no idea where you are! That incident convinced Barbara and Spence that walking with a group and a responsible leader would be a good idea, so they joined Pathfinders. Spence went on to become one of the first fully accredited day walk leaders for the Friends. Another much respected Pathfinder/Friend was the late Geoff Hunken whose best beer ever was the one that George presented to him at Wilpena Pound at the end of a challenging walk/climb led by Tim to a remote peak. Then there is Sue, a keen sports person who arrived at one of George’s walks and after checking the route said, “I’d rather play golf” and disappeared! Nevertheless, she became an ardent walker and produced stunning photographs on numerous walks.

The first overnight walking trip for the Friends was to Burra. Our Burra resident member Mike put together a great walk and had locals with walkie-talkies on hand to ensure safety. As it happened one walker had a medical problem and we greatly appreciated this support. On totting up the accounts Sadie and George discovered that they had made a tidy profit for the Friends while they were only trying to break even. Hence the idea of staging enjoyable events for members while providing income for the work of the organization was born.

Jill, leading her first walk for the Friends, took a minor wrong turn, and was corrected by George. Jill took revenge some months later after George had his Friends group “involuntarily separated.” Jill rang George first thing Monday morning with “At least I don’t lose people!”

All the Pathfinders mentioned wanted to put something back into walking as well as enjoy the company of new like-minded people. Hence they joined the Friends of the Heysen Trail. While this sounds like a mass exodus from the Pathfinders most kept up joint membership and value their time spent with the Pathfinders.

The aim of this story is to acknowledge the contribution members of the Pathfinders have made to the Friends and the fun they generated by doing so. It is recognized that many of the names would not mean much to newer members. However, the biggest message is to encourage our “End-to-Enders” who are making great new friendships to widen their circle and to help with the running of the organization.

As the gentleman who called on George over fifteen years ago promised, “It will be a life enhancing experience!”

Pathfinders still exist as part of a much wider professional program beyond what was done in the 90’s. The young bushwalking leaders of those days are now high achievers in Commerce, Industry, Science, Law, Education and Outdoor Pursuits.