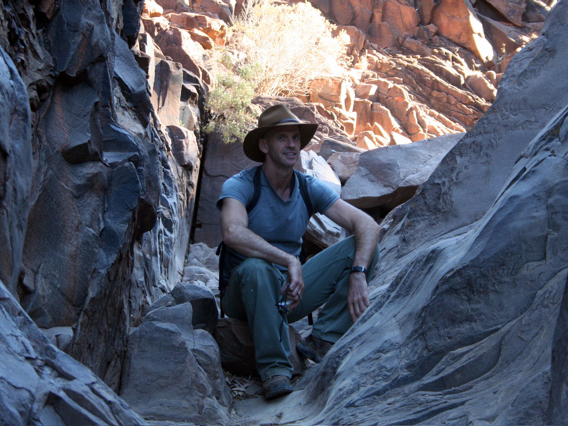 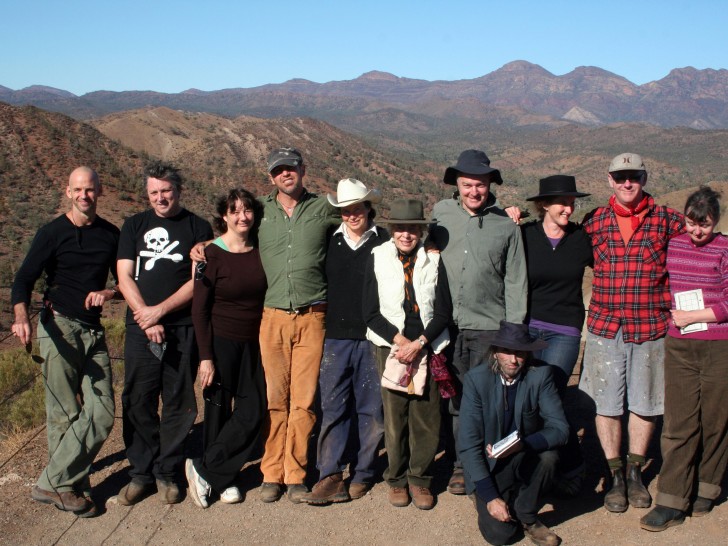 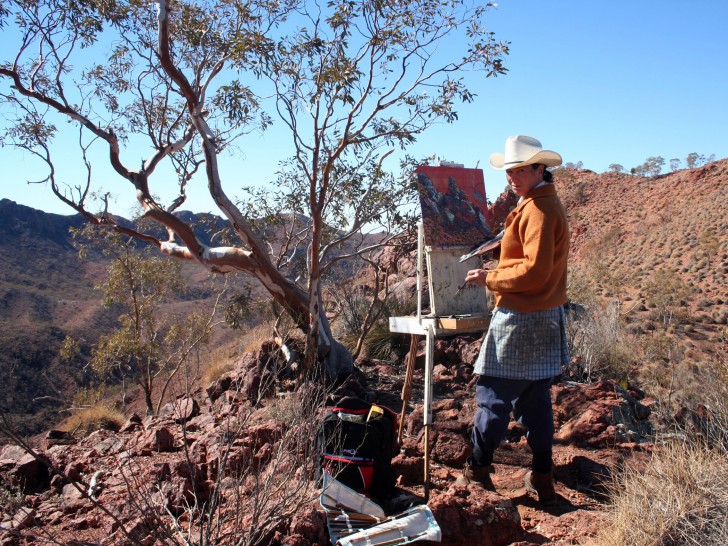 “painting en plein air – everything dissolved into just trying to make some kind of response to the most amazing landscape – even if it was the response of a stranger.” Euan Macleod.

The trail was constructed during the 1970s and 1980s and takes its name after German born Sir Hans Heysen (1877-1968), the renowned artist recognised for his paintings and watercolours of the Australian bush that so popularised the Flinders Ranges. Heysen’s home and studio ‘The Cedars’ is located on the trail near Hahndorf in the Adelaide Hills and was a fascinating stop over on this artistic tour. Artist Leo Robba, convened this special art trip with adventuring company, World Expeditions. It’s the third such adventure Robba and the touring company have organised for a group of artist friends, to travel to remote areas of Australia and immerse themselves in the landscape to paint and draw and develop an exhibition of their works. “The artists involved in this expedition and exhibition are primarily a close knit group of friends sharing an experience, travelling, painting, drawing, drinking and eating and laughing around the campfire, coming together with a common love of art,” said Robba.

At the crack of dawn artists stumbled out of swags quickly followed by easels, sketch pads, cameras and paint palettes tumbling out tents.

An itinerary was specially set to cover the most scenic locations for this art expedition. Some of the best sections of the Heysen Trail in the Flinders Ranges were combined with the more remote and spectacular peaks, pristine wilderness areas, rugged ridges and forests of Cypress Pine in the Gammon Ranges. The ranges offer some of the finest scenery anywhere in the world and the combination of spectacular peaks, rugged gorges and the rich colours of the desert offered the artists a stunning visual palette.

The group was fully supported throughout the trip with a professional crew providing camps, informed guidance and transport in 4WD vehicles. This allowed each artist sole concentration and study of the landscape they had come to observe, paint and draw. At the crack of dawn artists stumbled out of swags quickly followed by easels, sketch pads, cameras and paint palettes tumbling out tents. As the group made camp in and amongst the landscape they were able to rise early each morning to capture the extraordinary colours and light that would unfold before them. “I was surprised at the intensity of the competition among the group,” says Lucy Culliton.

“After a big night round the campfire drinking and listening to classic vinyl records on David Usher’s portable player, I’d wake at dawn and look up to see Euan already painting, Chris (Reg) drawing and to their side Leo at the easel. I started preparing my paints the night before!” she said.

Leo Robba and ceramist Adreinne Richards travelled from the lower Blue Mountains, NSW for this tour. Lucy Culliton from the Monaro Plains near Canberra. Euan Macleod, Reg Mombassa and Neil Frazer from Sydney’s inner west. They were joined by ceramist David Usher from Brisbane, David Keeling, painter and printmaker from Tasmania and Elisabeth Cummings one of Australia’s most respected senior landscape artists, from regional New South Wales.

On The Heysen Trail exhibition is more than simple representations of the Australian landscape by this leading group of artists. It is the making and bonding of friendship and sharing of artistic practice in a unique and challenging environment all while gaining a deeper understanding of nature and the land. Each artist has emerged from the art tour with individual responses and experiences some of which developing into a wider body of work beyond the exhibition at S.H. Ervin Gallery. Four artists from the group tour in May are returning to the Flinders Ranges to further their study and practice. On The Heysen Trail features work from all nine artists in a variety of paints, works on paper, (watercolours, gouache, charcoals, coloured pencils) and ceramics.

The exhibition celebrates S.H. Ervin Gallery’s 30th anniversary year. Special events include a Public Program of Artist Talks each Sunday at 3pm, artist’s workshops for children and adults and an evening slide presentation from World Expeditions. Money raised through the sale of works will assist the Gallery’s ongoing exhibition and education programming.