Bob Randall and I headed for Delamere and from there to Three Bridges Road, but as we left Delamere we noticed a heavy cloud of smoke coming from the forest and not far out we were stopped at a police road block. They were diverting traffic off the main road down toward Deep Creek as there was a large forest fire to the north. Being only vaguely familiar with the area it took a certain amount of going up and down tracks until eventually we came upon Tapanappa Road and drove on to Gate 70, the start of our walk.

We stepped out into smoke and a strong off shore wind- maps blowing everywhere, hat wanting to go elsewhere. The tape recorder that I was going to use for track notes proved to be a very good recording of strong wind blowing! By now we began thinking that this was not a good start and things had better improve; but in fact the further we walked down toward the coast the stronger the wind got. The only redeeming feature was that it was not a cold wind. Map reading was not a simple matter but we were both traveling OK and Bob’s knee was not causing any problem after a recent oil change and service.

After a couple of hours of “interesting” walking, leaning on the wind, we arrived at Boat Harbour and were amazed to find that it was sheltered from the wind – a good place for an early lunch. I had by now come to the conclusion that our day was going to continue on the same way; difficult. Although the wind was uncomfortable to cope with it was not cold, there was some cloud but it did not look as if we would get any rain.

Lunch over we headed across the creek, then up and over to the next cove ready to wind our way up Tapanappa Hill with the wind getting worse and of course the cloud building up and, yes, it looked very much like rain was on the way. There’s nothing like a day being consistent. Bob had recently been having a problem with a diagnosed hiatus hernia, which had caused some considerable discomfort in the past, but up to now had shown no sign of recurring. However, true to form with the day so far, immediately we began the long narrow, winding uphill track Bob started having a problem which got worse and worse with every uphill step. Bob was in trouble with severe reflux problems and breathlessness and we were only at the bottom of the hill. What could I do? A phone call to Julian , I might be able to get some useful advice – looking, looking in my pack for my mobile phone and sure enough because of the struggle with our gear in the wind at the start, I had left it in the car. Why did I bother getting out of bed this morning. Still I comfort myself that if I had the phone with me it probably would have been out of range anyway.

I suggested to Bob that I would have preferred him to have broken a leg – then I could have done something useful.

I considered the predicament we were in and the only positives I could come up with were that we were sheltered from the wind by the scrub we were walking through, it was not cold, and we had plenty of daylight left as it was only about 12.30 at this stage. On the negative side, we were at the bottom of a very long steep hill on a very narrow track through the bush, I couldn’t leave Bob in such an inaccessible spot nor was I able to carry him, his problem was getting worse with every step and of course the weather was changing and we had already had some rain. I think it was about this time of my deliberations that I suggested to Bob that I would have preferred him to have broken a leg – then I could have done something useful – as distinct from the feeling of uselessness I had at this time. Humour was not a major part of our conversation at this stage! Although I had brief thoughts that Bob may have a far more significant problem (maybe his heart) I dismissed these doubts as Bob had been diagnosed with a hernia. However, because he was having such difficulty with breathing my main concern was whether I could remember enough about mouth- to- mouth resuscitation. What a day!

I could only suggest to Bob that he take it as slow as he wanted, but I would stay with him until we reached the top where I could at least leave him at the car park while I did a 6 or 7km dash back to the car. Other than this I was quite useless and it took two and a half hours and a lot of willpower for Bob to reach the top – a tribute to his own level of fitness and absolute perseverance.

Having reached the car park Bob got settled in a reasonably comfortable spot as I had suggested to him that it would take maybe two hours for me to get to the car and return. Then, just as I was heading off we had our first piece of good fortune. Very few cars would venture down that track and especially on a day like this. I suspect, probably the only car of the day arrived at the car park. A few words to the driver and their camping gear was shoved aside, Bob and I were aboard and in ten minutes or so we were back at our car. My first thought was to get the mobile phone and speak to Julian who sounded a bit suspicious about the problem but suggested some milk may help to settle things for Bob. Our Good Samaritans, Grieg and Shiella were the most attentive helpers we could have found and a glass of milk appeared like magic. I did not want to delay any longer than necessary as my plan was to get back down to Delamere get some more milk and Quick-Eze then on to find a doctor at Yankallila. I think Grieg and Shiella were not that confident with us and chose to follow me back to Delamere, just in case. Considering our day to date I don’t blame them.

So, one piece of good fortune was followed by another. The forest fire from earlier in the day had brought a lot of fire fighters, trucks, communication van, police and a first-aid station, all gathered together at Delamere after completing mopping up at the scene of the forest fire. The attendants at the first-aid station quickly swung into action and had Bob seated, rugged up in blankets and on oxygen in rapid order. They checked blood pressure and pulse several times, asked lots of questions, filled out forms and generally everything settled down (including my blood pressure). Then, as a parting gesture lightning struck the pole next to the shed we were in. An almighty bang, the power went off momentarily and the thunder took over, rumbling off into the distance. Not because of this, although it didn’t’t help, a brief discussion led to an ambulance being called and Bob continued to be fussed over. I suggested to Bob that this was a rather extreme case of attention seeking. The ambulance arrived in what seemed to me a very short space of time, Bob was checked again, loaded in the ambulance and was on his way to Flinders Hospital. The first-aiders, the ambulance medicos and the attention at Flinders was amazingly efficient and for the first time in the day everything started to fall into place properly. 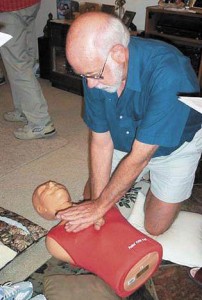 Following on Bob and Colins adventure, some friends thought it appropriate to brush up on their CPR skills

The purpose of this article is not about the particular problems of the day as we have all had “one of those days” occasionally, but to illustrate how vulnerable we are when we are out in the bush and how there are so many ways in which we can get into trouble. Problems can occur that we cannot control nor foresee and a generous first-aid kit is not always the answer. In this case a mobile phone, if it was in range, would only have helped in giving moral support as I had no useful medication. However, it does reinforce the proposition that there should always be a minimum of three members in a walking group – but again in this case it would not have helped as we were lucky to get a quick ride back to our car. It may have helped to have a third person sit with Bob, but then again it may not have helped. We still had to get a quick ride back to the car. Importantly, though, aren’t we fortunate to be able to indulge in our bushwalking and still have at our disposal such a range of professional assistance.

Finally to put everyone’s mind at rest Bob is alive and well and going through the process of having some arteries unclogged. I have already suggested he comes with me on this really nice walk I have planned in Deep Creek! As the song says, “it was just of those days – just one of those crazy days” but it could have been much worse.

Magazine of The Friends of the Heysen Trail, view the latest issue - Autumn 2021 or past issues. 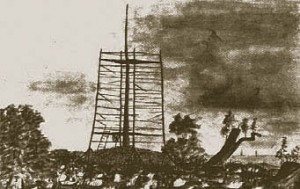 Mt. Lofty, that high “bump” on the skyline of the ranges overlooking the city, has been held near and dear by local residents from the very first days of the fledgling colony. Elsewhere in Australia only Canberra and Hobart share with us the privilege of having a mountain destination at their very doorstep, a fact now being appreciated by increasing numbers of Adelaide residents, and for many of us a short, fifteen-minute drive can find us soon tackling the lower slopes of the mountain.