BarryFinn was elected as a new Honorary Member at the AGM on March 18th 2005. The following notes were provided by John Wilson, who proposed Barry’s election. 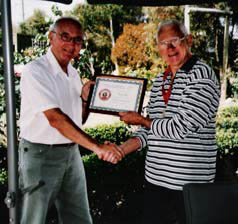 Most people who know Barry will be aware of his good nature, boundless enthusiasm, and willingness to be involved with whatever was needed.

Maybe it was his nature, or possibly his early time spent in the Fleet Air Arm, but Barry was also a straightforward character who called a spade a spade, and generally left people in no doubt as to where they stood with him.

During his working career, Barry was involved in running and managing both small and large businesses, culminating in the operation of a Post Office agency at Pooraka. This gave Barry a breadth of experience in dealing with people and practical business problems, which he put to good use in supporting our organization.

Barry joined the Friends in 1993, and since that time was heavily involved in all of our activities, so became well known to all our other active members.

Barry was a regular office volunteer for over eight years, and in the recent years took charge of the stock control of maps, books and similar items sold in the office – a task he performed with little fuss but some flair, as when he almost cornered the market for some of the superseded Heysen Trail strip maps which he was sure would be in great demand.

Barry was also a maintenance Section Leader for over seven years, looking after the section near his home from Glen Bold to Piccadilly. During this time he marked the Hahndorf Spur from Bridgwater, done in response to a bequest from Geoff Hunkin’s family.

Barry served on the Friends Council for a number of years, and was Vice-President during the latter part of his term. He was also an active walker, and led a number of walks for the Friends.

Some of his other contributions were in setting up and manning a Friends booth at the opening of walking seasons, and representing the Friends by speaking to Probus Clubs, Libraries and Health Care Centres.

Barry’s other main interest has been with the Mylor CFS, where he has been an active volunteer for a number of years.

With his wife Dawn, Barry has now moved to Victoria to be nearer their family.

It gives me great pleasure to nominate Barry Finn for Honorary Membership of the Friends of the Heysen Trail, which I believe would be a fitting tribute to his association with us.