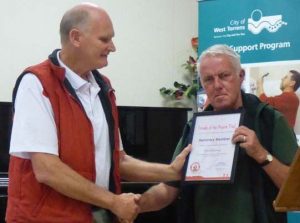 David Rattray being presented with Honourary Membership by Friends of the Heysen Trail President, Robert Alcock

David’s interest in the outdoors and walking is evidenced by the fact that he has been involved in the Scouting movement for over 50 years. David completed the requirements of the Queen Scout Award and held several leadership roles in Scouting as Assistant Cubmaster, Scout Leader and Venturer Leader with Torrens Park and Happy Valley Scout Groups. At one stage David was a member of the Scout Bushwalking Team training other leaders in the art of bushwalking.

The Group Leader at Happy Valley Scout Group said about Dave on his retirement as a leader in 2014:

Dave has been a dedicated and respected Leader at Happy Valley Scout Group since being appointed Assistant Scout Leader in 1985. Dave has been recognised with a number of Scouting Awards, including the Silver Koala and in January 2007 was recognised with an Order of Australia Medal for his service to youth through Scouting.

Dave’s enthusiasm showed in his involvement at Group, District and Branch levels. He committed himself to all sections, his knowledge is endless. He offered support and encouragement and acted as a role model to fellow Leaders of all sections.

Although David has not done many walks with the Friends he has led the occasional walk. He and his wife Dianne are members and occasional walkers with ARPA.

David has also been a member of Naval Reserve for over 21 years, often noticed when he has to absent himself from the office to attend a lunch meeting. This has again, resulted in another medal for good service. 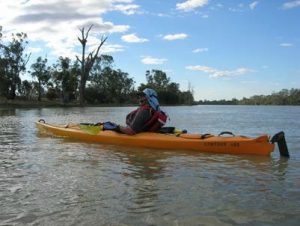 David’s latest project is his aim to kayak the River Murray from source to sea.

For good measure, David’s latest project is his aim to kayak the River Murray from source to sea. He is over halfway, and that is another great effort in itself.

As far as his association with the Friends is concerned, David has been a member since the early 1990s and received his End-to-End certificate (no 104) in the winter of 2003.

David worked with Doug Paice, a previous editor of Trailwalker, in late 1980s and Doug encouraged Dave to join the Friends. The entire trail was completed independently, carrying a rucksack, with the two  chaps he is now kayaking the Murray River. Scouts or Venturers accompanied David along much of the trail particularly the Flinders Ranges and the Adelaide Hills and  Fleurieu  Peninsula areas.

Venturers were encouraged by David to assist Thelma Anderson and Peter Hill in maintaining the trail in the early 1990s.

In 2005 David commenced service as a volunteer in the Office, soon after retiring and joined Council in 2008. Within a year he added the role of Membership Secretary to his list of responsibilities. Around the end of 2010 David also took on the position of Chair of the Office Committee. He continues to carry on all of these responsibilities. It is a credit to David that he has steered the Office Committee and volunteers through several years of substantial change while ensuring that we provide advice and service to members and walkers. In the words of another Office volunteer:

Those who have worked with David in the Office over many years can attest to his amazing dedication.

Always at work well before anyone else, he has everything organised for the rest of the team when they arrive. No problem is too difficult and David’s knowledge of every aspect of how the organisation and the office systems work is second to none.

At times when the pressure is on, David’s calm professional approach prevails. For a number of years David has organised and led the January training seminars for all who work in the office.

It is fitting recognition of his service that David Rattray, OAM is accepted as a deserving recipient of honorary membership.