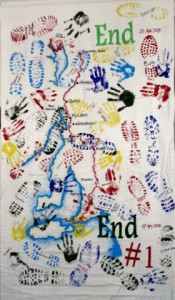 The Friends started in 1986 primarily as a builder and maintainer of the Heysen Trail. Walking was not part of the core functions and there was some quite vehement opposition when the Friends started its walking programme. The walks were primarily day walks around Adelaide, on a Sunday, with some weekends away, taking walkers further afield.

Whilst many walks incorporated walking the Heysen Trail, the Friends had no formal programme to encourage our members to walk the full Trail.

It was pointed out to the Walk Committee, in 1999, that ARPA organised walking groups along the Trail and at that time were up to “Heysen 5” and that we, as The Friends of the Heysen Trail and Other Walking Trails, should facilitate walking the entire Heysen Trail for our members.

His name was David Beaton and it to him should go the credit for the idea. At the time I was Chair of the walk Committee and thought I should get involved and from that point we became a team.

David and I walked much of the Trail prior to the actual walk, determining starting and stopping point, road access, bus access and escape routes. We drove many kilometres around the Flinders checking and the plan that evolved remains by and large the plan that continues to this day.

Initially, they were called the Millennium Walks, as the first started in 2000, and we were highly excited at 44 walkers booked on that first walk. The largest group I recall walking at one time with the Friends.

We recruited a whole tribe of leaders, and started the using buses to get us to the start of a walk, so we walked to our cars. Many of the bus companies we started with in 2000 still provide our transport today.

As with current End-to-End groups, the walks were Sundays until the Barossa, when weekends away started.

I thought that at this point, the whole thing would fizzle out … Were we in for a surprise!

To be honest both David and I thought that at this point, the whole thing would fizzle out, as some of our regular walkers indicated they couldn’t manage weekends, for various reasons eg work, family commitments etc. Were we in for a surprise!

The start of the year of weekends away saw about 40 walkers book on, with quite a number of new walkers replacing those that dropped out and it was pretty much that group that jelled and formed End-to-End 1.

We changed the name from Millennium Walks to End-to-End when it was felt that the Millennium had clearly disappeared from our consciousness.

End-to-End 2 started out as “The Millennium Catch-up Walks” for those had started with End-to-End 1 and needed to fill in parts of the Trail. At some point it became End-to-End 2 lead by Jerry Foster and others.

By this time, for some reason, the End-to-End programme had captured the imagination of walkers and End-to-End 3 had 144 walkers book to start at Cape Jervis. Luckily for the leaders only 121 turned up!

This group, lead by Simon Cameron and Arrienne Wynen, set a pattern for End-to-End groups that persists to this day.

Splitting the group into faster and less fast walkers, so everyone could walk at their own pace.

Themes, where a dressing up and wearing attire appropriate to that idea took place. It also heralded using of local community organisations to provide Saturday meals for the group, when weekends away started.

End-to-End 3 numbers settled out at about 70 per walk towards the end, however not all were finishers and, as I recall only 3 who started actually walked every day without fail.

If we were surprised at the enrolment for End-to-End 3 then End-to-End 4 took us completely by surprise at 204 walkers booked for Day 1! Again, luckily for the leaders only 144 turned up and that group, who should finish the Trail this year, are running at about 50 walkers.

This was too much, so it was decided to run the End to End programme every year with a one bus load limit on numbers.

There was much grumbling, as unless you were quick the walks booked out early each year, so much so that End-to-End 8 booked out in 20 minutes, with an opening time of mid-night!

And so we now have End-to-End 4, End-to-End 5, End-to-End 6, End-to-End 7 and End-to-End 8 all at various points along the Trail, with some due to finish this year (as mentioned earlier), some starting their weekends away and one group yet to start, End-to-End 9.

We even have a group fast-tracking from north to south, the End-to-End -1 group, all backwards to a walker.

From the End-to-End groups we have gleaned walk leaders, council members, office volunteers, a new Greening Group, maintainers and lots and lots of fun.

Not for one moment back in 1999 did David or I realise what we had created.

I remember viewing the reptile exhibit of the Detroit Zoo shortly before coming to Australia. Essential ‘snake facts’ reminded me that the greatest population and variety of poisonous snakes on earth could be found in Australia. OK...let’s rethink this plan. Sure, we have bears and mountain lions around the place, but I’ve managed to live a relatively active outdoor life for 35 years without so much as a claw mark.