As I recall, our first involvement as a Club was in 1983 when the then Leader, Penny McGee, organised for us to attend a ‘workshop’ organised by Terry Lavender and his fellow employees from the D.R.S. It was held somewhere in the hills and had us moving mounds of earth from A to B, digging holes, erecting posts and suchlike – not something that we did every day! This was the start of our involvement but it was when the late Doug Leane (Hon. Member of the Friends) and his team moved to the Barossa area – sometime in the late 80s – and he suggested that the Ramblers take over Section 8 that our commitment commenced in earnest.

Section 8 is not long – approx 20 kms – but being in an urban area we have had to realign the trail on numerous occasions. For instance, when Highways decided to widen the Old Norton Summit Road it obliterated a safe trail, requiring a realignment onto the Giles property – and a constant battle with the invasive broom! A later realignment of this section had the trail move to within Horsnell Gully CP and an exit onto Woods Hill Road – and then the only way to maintain a link was through private property to Lobethal Rd. This of course necessitated negotiations with the trail Managers and the signing of agreements – a lengthy process. Further Highways activities meant that the trail along Summit Rd. near Mt. Lofty became hazardous but the realignment along Summers Hill Rd. was only achieved after prolonged negotiations and debates over property bounderies. It was a similar situation at the Summit and Greenhill Road intersection – as vehicle traffic in the hills increased so the trail had to be moved to ‘safer’ areas. Within Cleland CP the trail is on safe ground, with the only confusion caused by the ‘new’ signage but I think everyone is now accustomed to this.

The Department of Environment, Water and Natural Resources (DEWNR) is the present Manager of the trail and has tightened up its responsibilities for OHSW as it relates to volunteer involvement, but the WEA Ramblers plan to continue to contribute to trail maintenance, as it knows that ‘every little bit counts’! – and appreciates the opportunities that the Heysen Trail provides for safe and happy walking. 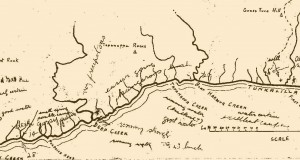