Born in England Terry Lavender is more Australian than most of us who claim Australia as our birthplace. His knowledge of South Australian history is quite astounding and in relating historical facts about a particular area, for those privileged to join him, one is guaranteed of an absorbing and entertaining account of occurrences in the area dating back to the earliest days of the colony. 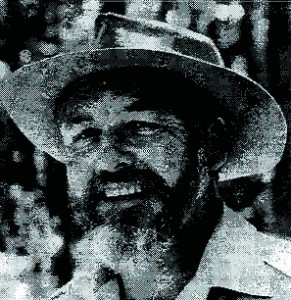 With a background of working in the outdoors Terry arrived in Australia and worked for the National Fitness Council in Adelaide, then joined the Department of Tourism, Recreation and Sport when the government placed responsibility for walking trails with that department. The idea of a walking trail to connect the Mount Lofty and Hinders Ranges was first suggested by Warren Bonython as a member of a Long Distance Walking Trails Committee in 1969.

Terry Lavender was later given the task of delineating and marking the route the Trail would follow. With a small staff overcame seemingly insurmountable obstacles associated with access, district councils and landowners by patient, sensitive and successful negotiation, at the same time earning the lasting respect and friendship of many farmers along the way. He also resolved the inadequacy of sufficient staff to implement the work of marking the Trail by calling a meeting of walkers to form a volunteer group to assist with the task. The meeting held in June, 1986 and the Friends of the Heysen Trail and Other Walking Trails was formed. With the enthusiastic support of the volunteers and under the capable supervision, guidance and assistance of Terry and his staff, marking of the Heysen Trail was completed in 1992.

The meeting held in June, 1986 and the Friends of the Heysen Trail and Other Walking Trails was formed.

Terry Lavender’s leadership and dedication inspired both staff and volunteers in their enthusiastic support of the project. Both his public life and his private life, with his wife Anne and son Anthony, completely revolved around this outstanding achievement that has given to all Australians, particularly South

Australians, the opportunity to travel into scenic areas of the State not previously available to them. He is held in the highest esteem, both throughout the bushwalking and the wider community for his continuing commitment and contribution to the development of a South Australian icon. He was also responsible for the marking and mapping of the Mount Lofty Walking Trails in the Barossa district and part of the Onkaparinga area. The award of a Churchill Fellowship to travel overseas to study walking trails in England, U.S.A. and Europe added to his mountain of knowledge and understanding of his subject.

Terry was awarded the Medal of the Order of Australia, announced in the Australia Day Awards in 1994, for his achievement.

Through the establishment of his company Lavender Trailmaster he guides interstate and overseas tourists, school groups and local bushwalkers along and beyond the trails he was commissioned to develop. He has also produced various maps and a number of books for publication and is currently designing a walking trail to celebrate Federation of the Nation. The protection of road reserves for recreational use is another area where Terry’s efforts continue to be significant, defending the retention of roads identified by the Committee Reviewing Road Reserves for Recreational Use and supporting the activities of the Walking Federation of South Australia for the benefit of all bushwalkers.

Terry was awarded the Medal of the Order of Australia, announced in the Australia Day Awards in 1994, for his achievement. 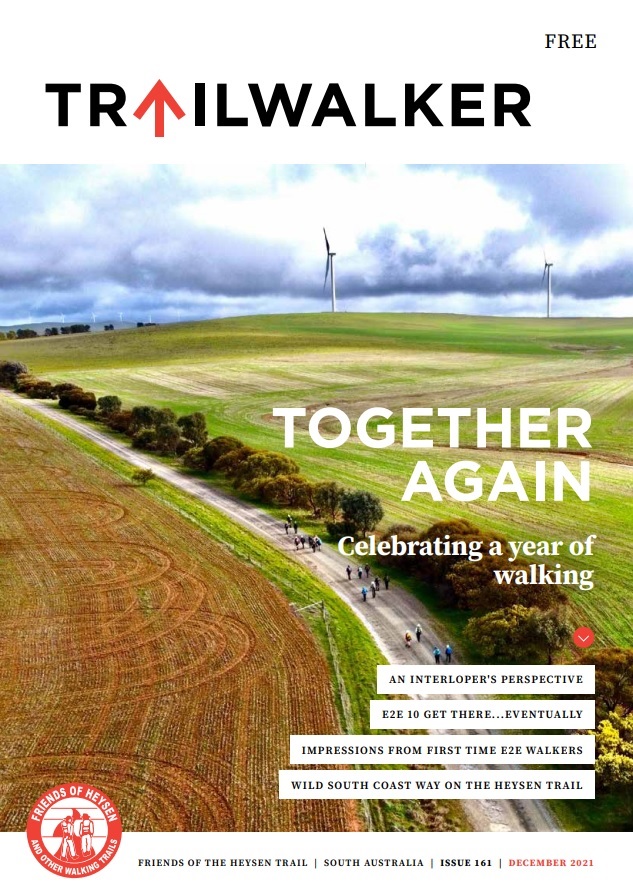 Magazine of The Friends of the Heysen Trail, view the latest issue - December 2021 or past issues.

Walking through farmland near Inman Valley