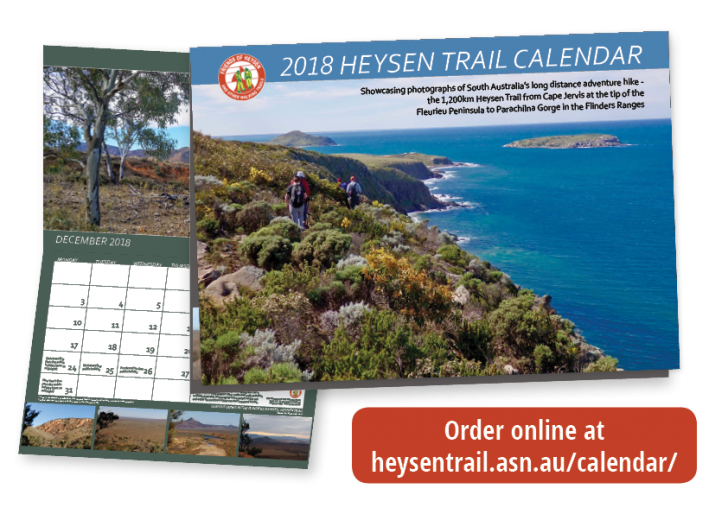 Hurry, order your copy of the Friends 2018 Calendar now.

The presses are nearly ready to roll on the production of the 2018 Calendar.

Submit your order before midday on this coming Friday, November 3 and catch the pre-publication discount price of $15/copy.

After then limited numbers will be available at $18 each. Expected delivery date is late November 2017.

The Friends 2018 Calendar showcases our member’s photographs of South Australia’s long distance adventure hike. The 1,200km Heysen Trail extends from Cape Jervis at the tip of the Fleurieu Peninsula to Parachilna Gorge in the Flinders Ranges.

The calendar is an A4 wall calendar, which opens up to A3 size.

Purchase it on line or contact the Friends Office.

For on-line store orders, postage to anywhere in Australia is $4.50/single copy.

Arrange to pick up your copy at the Office or the Friends End of Year Bash.

We plan to have copies available to pick up at the End of Year Bash, BBQ and Band at Belair National Park on Sunday December 3.

If you want to join us at the Bash, you can book at:  heysentrail.asn.au/invite    or via the ofﬁce. 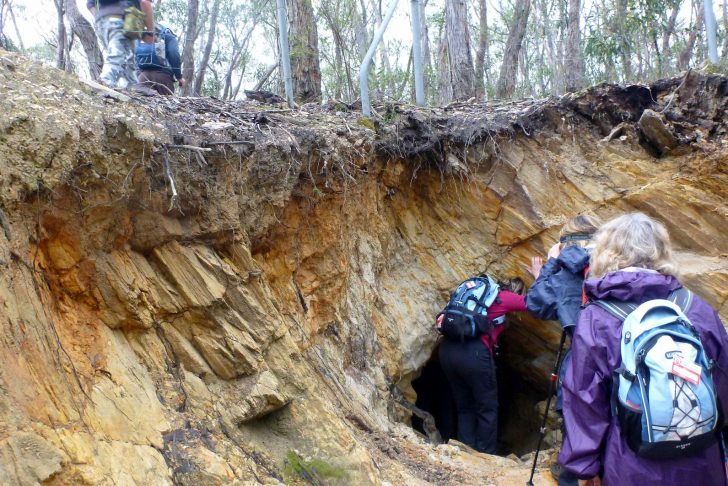 The Heysen Trail has returned to the normal route in the area of the Jupiter Creek Gold Diggings near Echunga.

In April 2017 access to the site was closed following an assessment of damage caused by storms last year. This resulted in a considerable amount of erosion and subsidence around the old mine shafts. In the interest of public safety the Government temporarily closed the Gold Diggings.

During the closure, access to the main carpark and the walking trail entry from the main road were fenced off. The Heysen Trail was rerouted to follow roads around the Jupiter Creek mine site.

The fences have now been removed and our maintenance volunteers will finish remarking the original trail within the next few days.

However a main attraction at the site, the New Phoenix Adit underground tunnel has been deemed unsafe and is permanently closed to public access. After a geotechnical inspection of the stability of the tunnel and shaft,  it was closed in the best interest of public safety.

Keep up to date with the latest Heysen Trail reroutes

From time to time the trail route can be changed wither temporarily or permanently. You can keep abreast of changes by referring to the Trail re-route page on our website. 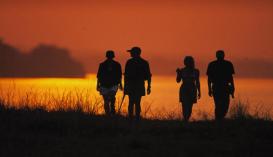 As the walking season comes to a close, with the arrival of warmer evenings and daylight saving our Twilight Walks begin next  week. There is a 1.5-2 hour walk on Wednesday nights until March.

The full programme is listed on our walk calendar but here are the details for the first four walks:

Walk fees are $5.00 ($1.00 for walkers under 18 years of age). Remember that Golden Boots passes are now accepted for Twilight walks.

Register online or via the office

Further details of our walks and walker registration can be found on our website at www.heysentrail.asn.au/walks/ 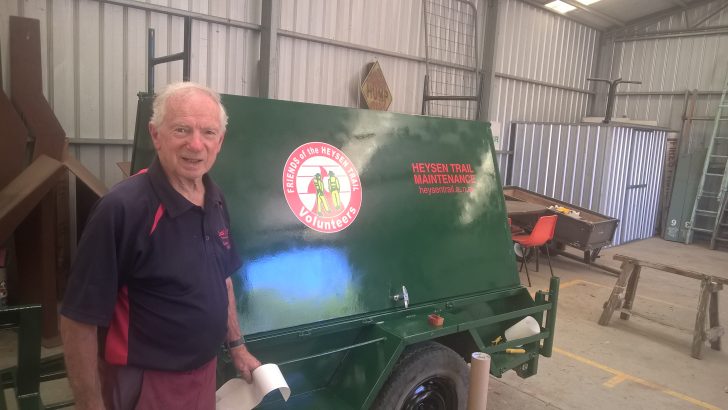 Inside our Maintenance Shed at Cobbler Creek

Did you know the Friends of the Heysen Trail operates a Maintenance Shed at the Cobbler Creek Recreation Park?

Wondering what goes on behind the scenes of the Trail Development and Maintenance program?

Did you know we have a working partnership with the Work for the Dole scheme to produce toilets and platforms?

Come along to the Friend’s Shed Open Day

Details and how to register…

All you need to bring is a chair and hat.  BBQ and drinks will be supplied

Register for the free event

We have work ready to do now:

By Christmas we will have 3 new toilets and 15 camping platforms ready to install at a range of locations along the trail.

Do you have home handy person/building skills?

If you are a skilled home handyperson or tradesperson and are willing to participate in one or two maintenance trips per year with a small group, please put your name on the list below. Typical work includes carpentry, painting, roofing, plumbing, glazing and plastering.

If you can help in any of these areas, please let us know.

You can leave your name to enter your availability preferences and interests/skills and we will add you to our Maintenance Volunteers mailing list.

This is your chance to ‘give a bit back to the trail’. 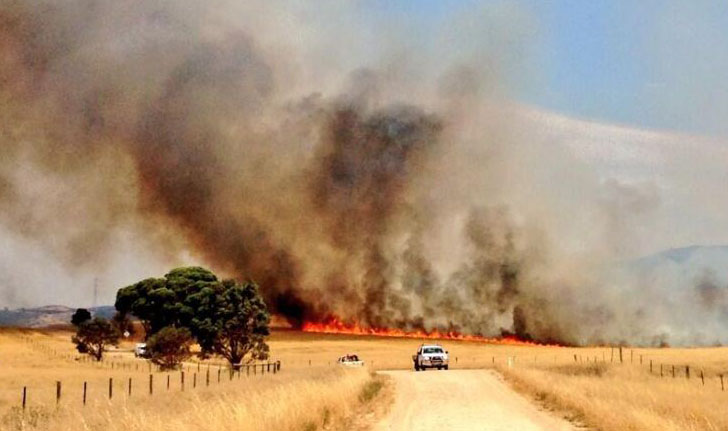 Walkers need to be be aware that the Fire Danger Season is nearly upon us. As a result, there are restrictions and the early closure of the Heysen Trail in some locations. A prescribed burn off at Little Mt Crawford today also restict walker access.

Early declaration of the the Fire Danger Season in the Mid North.

The Country Fire Service has announced the early declaration of the Fire Danger Season in the Mid North. For 2017 the date has been brought forward by 2 weeks and the season now commences on 1 November.

Further information on the Fire Danger Season Dates can be found on the CFS website. At this stage the dates have not yet been declared for the Mount Lofty Ranges region.

The commencement of the Fire Danger Season signals the closure of the Heysen Trail in a region for the year. This is a one of the  conditions of the access agreements negotiated with the owners of private property along the trail.

As a result, the Heysen Trail north of Tanunda will be closed from November 1 2017.

There are some sections of the Heysen Trail that remain open to walkers during the Fire Danger Season – these are mainly where the trail traverses National and Conservation Parks and Forestry Reserves.

You can find a list of those sections here

However the trail also closes in these sections on days in which a Total Fire Ban has been declared.

Prescribed burn at Little Mt Crawford on October 24 will close the trail in that area for a week.

Forestry SA has announced a prescribed burn will be held today, October 24 2017, at Little Mt Crawford (in the Mount Lofty fire district).

Please note that the normal route of the Heysen Trail in the Little Mount Crawford/Fromm’s Farm area will be closed until further notice (possibly 1 week hence).

Forestry SA have installed signs in the area to divert walkers along Mount Road.

For any further information please contact the Forestry SA Ranger on duty during this time on telephone (08) 8521 1700. 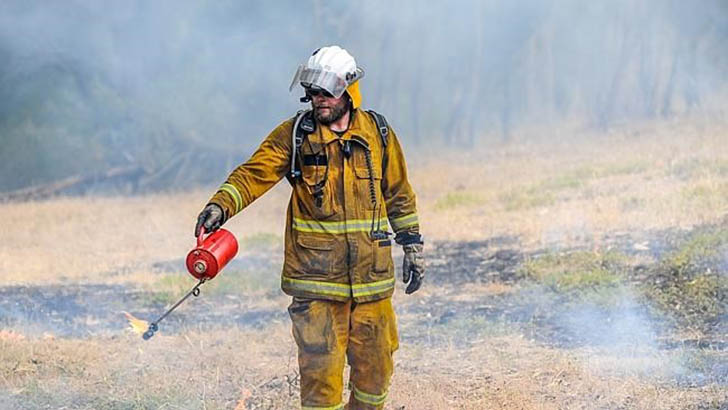 Prescribed burn off will cause a temporary closure of the Heysen Trail in the Cleland Conservation Park.

Parts of the Heysen Trail and other tracks in the Cleland Conservation Park will be temporarily closed in the next couple of weeks. The Department of Environment Water & Natural Resources (DEWNR) will be conducting a prescribed burn in the area.

The timing of the prescribed burn and temporary closure will depend on suitable weather conditions. DEWNR have advised it may happen as early as today, Tuesday 10th October 2017. The burn off should happen before Monday 30th October.

The prescribed burn area includes several tracks that form part of the Heysen Trail, namely the Lodge Track and the Wine Shanty Track (eastwards through to the intersection with Nilee Track).

To ensure the safety of walkers, DEWNR are proposing to close these tracks to the public on the day of the burn and the following day.

DEWNR will redirect walkers walking in a northerly direction to use the Gurra Track out to Mt Lofty Summit Rd. Walkers will then take the Yerang Track to rejoin with Wine Shanty Track (and vice versa in the southerly direction).

The day after the burn walkers will be able to use the Nilee Track to rejoin the Wine Shanty Track.

DEWNR will endeavour to erect signs in the vicinity to re-direct walkers. 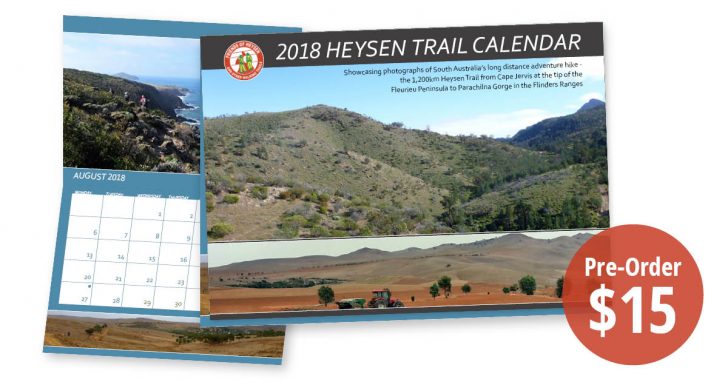 The Friends of the Heysen Trail 2018 calendar is currently being compiled and will soon be available.

Submit some of your photos for the 2018 Calendar for a chance to win a free copy.

Photos need to be landscape shaped and meet minimum technical specifications. Generally a 7 mega pixel camera will suffice if on the highest image quality setting.

There is a maximum of four photos per person. If your photo is selected for inclusion in the calendar, you will receive a complimentary copy.

Closing date for contributions is this Sunday, October 15 2017.

Email your photos to heysentrail@gmail.com

Email size can be up to 25MB ( however your email provider may not allow emails of that size).

You can now order copies of the Friends of the Heysen Trail 2018 calendar for the pre-publication price of $15.00

Get one for your wall at home or work or buy some as gifts for family and friends. We expect to have copies available for delivery by the end of November.

By ordering the calendar from our On-line shop you can request postage to an address in Australia or overseas. Postage charges to any address within Australia (for a single copy) will be an additional $4.50.

Pick your copy from our Office or at the End of Year Bash.

You can also order the calendar from the Office.  Contact us either by phone or email.

If you can get into the office you can take delivery yourself. Alternatively, we expect to have the calendar available for pick up at our End of Year Bash at Belair National Park on Sunday December 3.

However, if you can’t pick up the calendar, the Office volunteers can also arrange to post it to you. 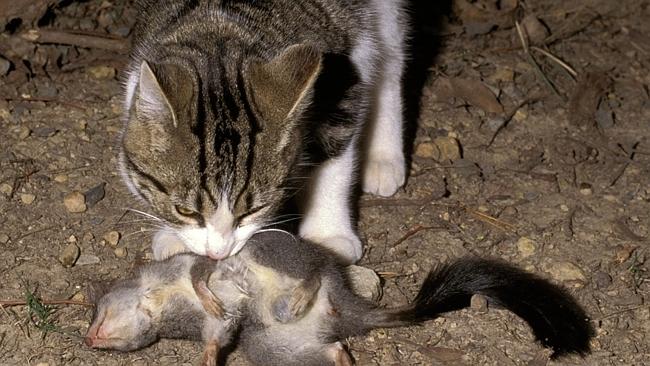 A number of tracks within the Ikara-Flinders Ranges National Park, will remain closed each night over the next 12 months. The current feral animal control program has been extended, so walkers are advised to exercise caution in the area.

The purpose of the extended closures is to ensure the safety of the public during a feral cat control program to be conducted after dark. The aim is to protect the populations of recently reintroduced Western Quolls and Brushtail Possums.

The evening closures will continue through to Sunday, 30 September 2018.

As daylight hours vary over the period of the control program, there are a range of closure times. They are:

Tracks and walking trails will remain open outside of these times.

The Heysen Trail will remain open at all times, however walkers must:

If you are camping in the park, you may see spotlights and occasionally hear firearms in the distance at night. The Rangers have advised that the control program will not take place in the vicinity of campgrounds or huts.

The tracks that will be closed at night include –

You can get further information on the feral animal control program and the nightly trail closures from the Natural Resources, SA Arid Lands website or by phoning the office on (08) 8648 5344 or 0428 116 035.