The Friends of the Heysen Trail office will be closed from Monday 17th December to Friday 11th January. If you want to register for either of the two walks during this period and haven’t yet done so, please contact the walk leader on the phone number provided on the walk details page.

The Friends of the Heysen Trail Christmas Dinner will be held at the Hackney Hotel, Hackney Road, Hackney at 7pm Friday, December 7. Please RSVP to the office.

Republished from the Victor Harbor Times
http://victorharbor.yourguide.com.au/
news/local/general/win-for-walkers/1078165.html
31 October 2007 – 8:29AM

INMAN VALLEY – A protest by walkers has persuaded the District Council of Yankalilla not to privatise a public road at Inman Valley.

Although few walkers currently use the road, it will remain open because of its value as a potential future access point to popular walking areas such as the Heysen Trail and Myponga Conservation Park.

The road runs through RP and PM Lander’s property at Inman Valley.

At its latest meeting, council considered transferring the road to the Landers, so their land could be made into one allotment, rather than two sections split by the road.

The Landers had agreed to pay the council $12,430 for the land transfer, and have also had to cover costs for preparing a preliminary plan and schedule, advertising, survey, plan preparation, conveyancing, lodgement and transfer fees, and other charges in regard to the road.

Council commenced negotiations and legal work for the road’s closure following a decision made back in December last year.

In March, public submissions were called for regarding the closure, and two objections were received, from the Walking Federation of South Australia, and the Office for Recreation and Sport respectively.

Thelma Anderson from the Walking Federation’s Walking Access Committee spoke against the closure at the meeting, explaining the "virtues of walking" to the council, and urging council to consider the future recreational value of the road.

She encouraged the council to go what she said was the local government trend of privatising unmade public roads.

Cr John Hughes agreed, saying "it is important to keep these roads in public community ownership".

A division was called following a vote, with Crs John Hughes, John Sanderson, Mandy Aistrope and Janet Jones voting to leave the road open, while Crs Allan Barnes, Bruce Spilsbury and Andrew Gebhardt wanted to close and transfer it.

Chief executive Roger Sweetman said council has many hundreds of unmade roads, and suggested that information about which ones are of value would aid in future decision making.

The CFS has advised today that the commencement date for the Fire Danger Season has been brought forward for the 2007/08 season.

The Heysen Trail passes through 4 Fire Ban Districts, as detailed below (and on http://www.heysentrail.asn.au/
heysen_trail/fire_danger_season.htm), and sections will be closed from these dates:

Due to popular demand, a second trip has been organised along the iconic Kokoda Track. 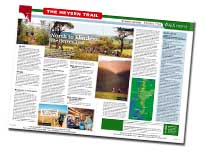 A new website feature has been released today – a forum dedicated to accommodation options along the Heysen Trail. Although primarily focused on campsites, huts and shelters along the Trail, you can also view and comment on other facilities near the trail (like caravan parks, motels, B&B’s etc in nearby towns).

So if you’ve used or seen some of these facilities along the trail, please use the forum to view and leave a comment. It would be good to hear about your experiences using these facilities, we’re also keen for people to include photos of the facilities (especially those currently without a photo).

I’m collecting people’s experiences and photos from last Sunday’s and next Sunday’s full and half hikes for the Sea to Summit hike.

All members and visitors are advised that due to a drastic shortage of staff there will be a few days when the Friends’ office will not be open during July and perhaps August. Contact the office during normal opening hours (Monday to Friday, 10.30am to 2.30pm) (08 8212 6299) for further details. See Shop Opening Hours.

This website is now being maintained by Paul Davill.

General maintenance requests can be entered into the
General -> Website Issues/Feedback forum.

Alternatively, you can email your request direct to Paul by emailing the email address on the Contact page.