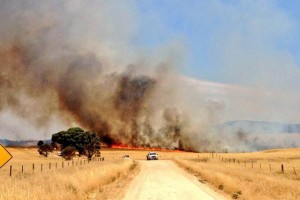 The Country Fire Service  (CFS) has announced the dates for the 2022/23 Fire Danger Season.

Many sections of the Heysen Trail are closed during the Fire Danger Season. As the trail passes through several fire ban districts, the trail closures commence progressively from Tuesday November 1st.

The CFS has also announced the fire danger season for the Mt Lofty District will commence on 1st December 2022 and continue through until midnight on 30th April 2023.

As indicated above the Heysen Trail will reopen during April/May 2023. The re-opening dates vary across the three Fire Ban Districts the Trail passes through.

The Friends have taken delivery of the revised version of the Heysen Trail map sheet 1.  The newly released Edition 2 map covers the Cape Jervis to Kuitpo section of the trail. It incorporates the Wild South Coast Way on the Heysen Trail – the 74 km long series of spectacular walks between Cape Jervis & Victor Harbor.

You can purchase the new map sheet now via our online store, for $15 with postage from $3.70.

Remember, you can sign up to receive re-route notifications for your map sheet editions. All map sheets published since 2014 are available for notification.

Meanwhile the Friends map and book clearance sale continues. We are running low on stock of most of our ‘to be discontinued lines’.

We’ve sold our last copy of Warren Bonython’s classic, ‘Walking the Flinders Ranges’. However, we have been advised that the Royal Geographical Society have a few remaining copies. If you missed out on reading the story that led to the creation of the Heysen Trail, you can purchase the book from the RGSSA .