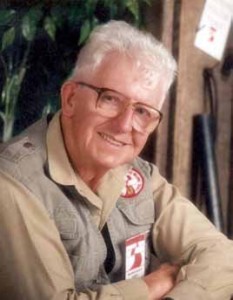 Fred had always been a keen bushwalker, and in 1979, with workmates Bill Gordon and Peter Buttery and their wives, established the Common Venturers walking group within part of the then Weapons Research Establishment at Salisbury. (This group celebrated their 30th anniversary at a recent walk).

In 1983, when Terry Lavender advertised for walking clubs to assist in the development of the Heysen Trail, Fred and Peter played an active role in all the discussions and planning which lead to the formation of the Friends of the Heysen Trail, and both were members of the Interim Council of the Friends when our organisation was established in 1986.

Fred’s main interest was in the Building and Maintenance Committee, and when it was decided to divide the Trail into sections for further development and maintenance, Fred assisted by the CVs, took over as Leader of the Section from Cudlee Creek to Bethany. At that stage the Trail was not fully marked, and the story of the final marking of this Section was recorded by Fred in Trailwalker No 6, in August 1987.

A qualified instrument maker, Fred used his practical skills in devising ingenious ways to simplify the work, and was involved in a number of building projects on the Trail.

A qualified instrument maker, Fred used his practical skills in devising ingenious ways to simplify the work, and was involved in a number of building projects on the Trail. The final one was the bridge in the Warren CP, for which he did the majority of the organising and drawing of plans. The bridge was assembled at Kidman Park and transported to the site where it remains one of the few bridges that hasn’t been washed away. Unfortunately ill-health prevented Fred from returning to see the completed structure when he was forced to retire from his work on the trail.

Born in Scotland, Fred saw active service with the Royal Navy in WWII, and worked for Ferranti there before emigrating to Australia in 1960 when he joined WRE. His other interests were with the Elizabeth and Districts Soccer Association, and in cricket as a long time member of SACA.

Tributes to Fred include an excellent profile by Jo Chesher in our Spring 2006 edition of Trailwalker, which is available on the Friends’ website. Fred will be remembered with affection by all those who knew and worked with him.

Fred is survived by his daughter and three sons, with their families including ten grandchildren. We extend our sympathy to the whole family.