Friend's Office closure : Our Office is currently closed for the summer break. Our volunteers will return on Tuesday 2nd February 2021. We will still process on-line shop orders but it may take up to 5 business days to complete them.

Why does one persevere? Well, it’s certainly obsessive, and it’s true that one develops a strong sense of ownership.

My wife Lee and I planted many trees during the Kapunda greening project, and I had a great desire to take on the long neglected Flinders Ranges sections, only recently filled by our present Maintenance Coordinator, Gavin Campbell.

In my endeavour to walk the entire Heysen trail I joined the Millennium Walkers in 2000 (later renamed End to End 1); but having already completed much of the trail through to the mid north, I walked ahead solo, arriving at Section 14 (Spalding to Georgetown) in 2002. This section had not been maintained since first marking, and looked easy, so I volunteered. Bad move!

I soon found that there were few posts and serviceable stiles, and virtually no readable marker plates throughout the entire 70km section. In some places there were no markers for long distances due to re-fencing and deterioration, and what markers were there were now non-standard.

There were stiles without fences and fences without stiles.

Subsequently, I and my helpers have installed some 50 posts, up to 500 marker plates, even more trail decals, and the job is never ending.

I am, of course, aware that much of the section is privately owned and the rest government owned; however let’s not forget that we, individual South Australians, are the true owners of the latter.

Section 14 covers four distinct regions: the Bundaleer Channel, Never-Never Creek, Bundaleer Forest, and a creek and ridge top walk to Georgetown. Maintenance along the Bundaleer Channel and in Bundaleer Forest is relatively easy; but the other areas are more remote, difficult to access, and are subject to cattle and sheep destruction of posts and markers. Posts sometimes disappear, perhaps as souvenirs, but presumably not firewood since they are treated for attack by fungi and termites. 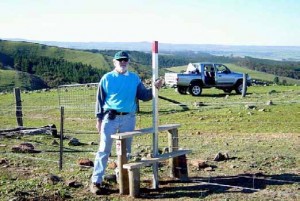 My poor 4WD ability was evident when I used the family Toyota Hilux to install a number of new posts in remote areas of the section. I very nearly slid off Campbell Hill into the Bundaleer pine forest, so gave up that approach and returned to backpacking posts and plates. I thought I had the section under control, only to find that sheep and cattle take a regular toll of posts and markers, and farmers, quite rightly, re-fence and do other necessary activities on their properties that affect trail marking. Good relations with owners are essential, so one just gets on with the job.

This year I found that a wind farm was in the planning, and if this goes ahead there will be a major remark of the trail. During October I walked through the section with End to End 3 and found that since an inspection last year several stiles now needed repair, cattle had destroyed a creek crossing, tall grass obscured markers, and one post was hidden in a feral olive tree. Two posts were missing and one post had been run over (literally) in Bundaleer Forest. Numerous deteriorated plates were repaired, but there is obviously a large work list for 2010.

Why does one persevere? Well, it’s certainly obsessive, and it’s true that one develops a strong sense of ownership. I am, of course, aware that much of the section is privately owned and the rest government owned; however let’s not forget that we, individual South Australians, are the true owners of the latter. That’s why it’s called public property!

Credits are due to my wife Lee, who has tolerated my obsession with the Heysen Trail, and has been driver and self-proclaimed Camp Follower for End to End walks and trail maintenance; my son Chris who can actually drive a 4WD in hostile places; and Gavin Bowden, my co-maintainer, who has been away this year on holiday but has a lot of work to do in 2010.

Old majestic buildings, scratching in the earth from an old mine or a broken down farm house. All were once the dreams of our forefathers, a story to be told of hope and hardship and now, just shattered aspirations.