In 1997, a group of eleven bushwalkers from ARPA (Australian Retired Persons Association), was planning to follow The Heysen Trail northward starting at Mt. Remarkable This satisfied the desire of some to walk part of the Trail and the desire of others to walk more in the Flinders Ranges. Because this area was unfamiliar to Glen and me, we joined this group but committed ourselves initially to nine days only.

Having climbed Mt. Remarkable, Mt Brown and Mt Arden and the numerous ups and downs in between, we were hooked!

Very soon we realised we liked the participants. We admired the leaders and their organisation; and we enjoyed the activity. Having climbed Mt. Remarkable, Mt Brown and Mt Arden and the numerous ups and downs in between, we were hooked!

We quickly reorganised commitments and were off again to complete the northern section. By now the group had increased to 22 the new members planning ‘make-ups’ as required. Unfortunately, the plan to cross the top stile at Angorichina at that time had to be aborted due to enormous rains which prevented access to take off points. The top three days however, were walked the following year.

The stretches between Mt.Compass and Kapunda were covered by day walks out of Adelaide. In 1990 the group walked the southern section. We did not join then but managed, with a friend, 2-day, 1-night stints to fit in with our calendars. Kapunda-Burra, Burra-Spalding and Spalding-Melrose were covered in three stages in 1999 back to our starting point. Great rejoicing!

Originally the group had dined at the North Star in Melrose. Great was the celebration when we dined there again having walked the whole wonderful Heysen Trail.

We saw seals, dolphins and even whales … In most areas, kangaroos and emus were prolific. An occasional echidna thrilled us.

In that time, we had seen parts of South Australia inaccessible except by foot. We learnt that Mt. Bryan was the highest peak of the Mt. Lofty Ranges. We shivered on its summit. The Trail passes over it just as over Mt.Lofty further south. We saw seals, dolphins and even whales as we traversed the rugged sections overlooking Kangaroo Island, the Pages and The Bluff. In most areas, kangaroos and emus were prolific. An occasional echidna thrilled us. 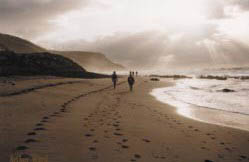 There were too many foxes but few rabbits. The eradication of these, together with goat culling and good rains made the Flinders Ranges a contrast of lush green growth with red, towering cliffs and gorges. With the changes of seasons, we saw delicate native orchids, spiky yakkas, a plethora of wild flowers, as well as quandong trees bearing edible fruit. Bird lovers enjoyed a multitude of birds including huge eagles. I thrilled to see my first red-capped robin. Depending on the time of year, the paddocks in the mid-north changed from dry stubble, to dark brown freshly ploughed soil, through the ‘filmy haze of greenness’ to the high waving fields of green wheat and gold canola. We saw cattle and sheep in thousands.

We learnt things and went places in our own State we’d never heard of or visited before,-the Tothill Ranges, Touralie Gorge and Jarvis Hill to name a few.Walkers on Tunkalilla BeachWe traversed a vertical metal ladder, a high wooden ladder, a wood and chain sand ladder, a raised bog ladder, a tunnel and many swing bridges as we followed the red and white Trail markers.

On hot days the vision of a coldie kept us going; in bitter cold we could not stop even to rest. Clothed in substantial wet weather gear, through rain sleet and hail we trudged in uncomplaining misery. But, mostly the weather was lovely. At lunch and other breaks, we lay back, relaxed and enjoyed the views, realising ‘God’s in His heaven, all is right with the world’ and saying; ‘aren’t we lucky to be doing this!’

And-those boring bits of road? What boring bits of road? Those sections often gave views of blue hills in the distance and beautiful variations of colour, while walking was safe and easy. As well, what looked on the map to be a ‘boring road’ frequently proved to be a Road Reserve with its natural, unspoilt vegetation and even mushrooms in season.

We got to know new people and made wonderful friendships. We kept to ourselves our sore feet, blisters and stiff legs and backs. We shared our pleasures and enjoyed tremendous fun, especially at briefings at the end of the day with nibbles and a warming red.

So, don’t be put off by what may appear difficult or boring on the map. It is just one foot after another. And, if you have the opportunity to walk the whole Heysen Trail, take it and enjoy it.