There are probably more spectacular sections of the Trail, particularly in the Flinders Ranges and near Deep Creek, but for interest and diversity of scenery, this section is hard to beat. 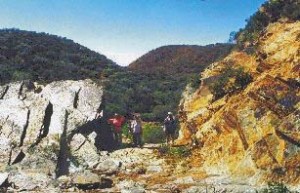 From Hallett, a dirt road lined with stately gums is followed past farm homesteads to the foot of the North Mt Lofty Ranges. A broad, picuresque valley sown in wheat, leads into the heart of the ranges and onto a timbered ridge. I climbed this steadily to the top of the range, with expansive views across to One Tree Hill and to the ranges north.

On the day of my walk, a strong, drying wind buffeted me all the way up, making forward progress slow and at times, almost impossible. I passed an ancient sheoak of substantial and gnarled girth growing in conspicuous isolation, given it’s exposed ridgetop location. The tree showed no sign of life, except for a single green branch which fluttered wildly in the wind, seemingly in defiance of the elements.

Mt Bryan now comes into view, rising in a series of rounded slopes to a dome summit, and falling somewhat short of expectations of the highest peak in the Mt Lofty Ranges. However, a later view of the mountain from the east, where it’s bluff-like mass rises impressively above grazing and cereal paddocks, gives a more accurate appreciation of it’s true height (936m).

Descending steeply off the mountain, I passed the remnants of an early farm which included grape vines and a lemon tree still bearing fruit.

Descending steeply off the mountain, I passed the remnants of an early farm which included grape vines and a lemon tree still bearing fruit, and continued on to the Old Schoolhouse at Mt Bryan East, just as a tremendous wind and dust storm blew in from the north. The storm was short-lived, as was my stay, and after a relaxing lunch and topping up on water.

I pushed on and eventually entered more arid country to the east, marked by the first appearance of saltbush, this side of the ranges being in a dry rainshadow.

I soon found myself looking down on the entrance to Tourilie Gorge. The next five kms is a highlight of this section of the trail and must rate alongside some of the finest walking to be found in the State.

At the bottom of the gorge, the trail follows the tortuous course of Tourilie Creek which has cut deeply into the rocky sides of the gorge, weathering smooth hollows and revealing colourful rock strata. The gorge is always narrow and is overlooked by tall, red cliffs. Wildlife was everywhere in the gorge. I surprised galahs and bright green parrots and saw the occasional eagle soaring overhead.

In the early days, the gorge was used as a shortcut for wagons between the Murray Plains and Hallett and there is still plenty of evidence of the old road, including a section of the original boundary fence, with weathered native pine posts still supporting strands of rusted wire.

On the ground I saw kangaroos, a nervous copperhead snake and almost stepped on an echidna, huddled into the stones of the creekbed. In the early days, the gorge was used as a shortcut for wagons between the Murray Plains and Hallett and there is still plenty of evidence of the old road, including a section of the original boundary fence, with weathered native pine posts still supporting strands of rusted wire. A dry, preserving climate and isolation have kept it intact for a century.

Eventually the gorge opens out on to the Murray Valley Plains and the scenery changes yet again to flat saltbush plains, supporting light eucalypts. At 7.30 pm I set up camp beside the trail in sandy soil which made the tent easy to pitch. Next morning I was off again at 6.00 am under an overcast sky and crossed two dry creekbeds which were wide and deep and must carry raging torrents during flash floods. Leaving behind the Murray Valley Plains, I began to climb into the sparsely-vegetated foothills of the North Lofty Ranges once more, as light drizzle turned to steady rain which continued for the rest of the day.

The trail worked it’s way SW, following watercourses and rising and falling over folds in the ranges, now clothed in thick mallee. The scenery and walking were always interesting and moderate temperatures continued throughout the day, despite the steady rain. I found myself traversing two steep, rocky ridges, the most arduous climbing on this section and then on to more open, grazing country and my awaiting vehicle at White Hill Road.

For this October walk, I found flies were a nuisance, insect repellent was handy and I carried and drank plenty of water. Still within reasonable striking distance of Adelaide, this is a wonderfully diverse walk through country which is at times close to wilderness and abundant in wildlife.