Temporary trail closure - Deep Creek National Park Sections of the Wild South Coast Way on the Heysen Trail will be closed from 12 pm Monday 30 May 2022 to 12 pm Friday 3 June 2022 for public safety while a pest control program is carried out. The Campgrounds in the Deep Creek National Park that will be closed are: Wuldi Krikin Ngawanthi / Eagle Waterhole Campground & Yapari Ngawanthi / Cliffs Campground. Read more

Temporary trail closure - Buckaringa: Note the change of dates - a section of the Heysen Trail will be closed from 7pm Wednesday June 1st to midday on Monday June 6th due to a feral animal control program. Read more 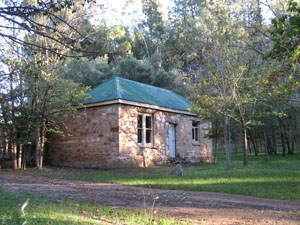 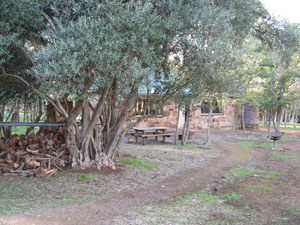 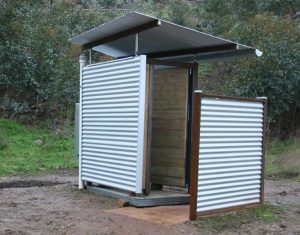 This hut is maintained by Friends of the Heysen Trail volunteers and reserved for Heysen Trail walkers and Mawson Trail cyclists. It is located on private property and not accessible to vehicles or caravans.
Bookings
No. The hut has a combination lock (installed in October 2017) . To access, press C (for clear) and then the code number is 5491.
Fees
No.
Facilities
Hut - hut, bunks, water, fireplace, toilet, table, seating. Camp ground - fire pits, tables, toilet (new toilet constructed August 2016), water
History
Bundaleer Forest was the first plantation forest in South Australia, and also the "birthplace of forestry in Australia". There was early concern that the State's precious native forest cover, never abundant, would be lost forever in the rush to find building materials. From 1873 the South Australian Parliament passed various acts to encourage the planting of forest trees, and in 1876 'Plantation A' - the first forest - was planted at Bundaleer. Many tree species - natives and exotics - were planted to see which would thrive in local conditions, and be commercially useful. Many of these trees, now a century and a quarter old, can still be seen at Bundaleer. The most successful product was the Radiata pine, today widely used in construction. There are other plantations along the Heysen Trail, at Kuitpo Forest and Mt Crawford Forest, but the vast majority of plantations of Pinus Radiatus are in the State's South-East. The first nurseryman at Bundaleer was John Curnow, whose cottage, known as Curnows Hut, is located near the original nursery. The timber from this plantation was used to build Spencer Gulf jetties, railway sleepers and in Broken Hill’s mines.
Notes
Curnows Hut has been reopened following the 2013 bushfires. The original toilet was destroyed in the bushfire). A permanent toilet was installed at the campsite/hut by the Friends of the Heysen Trail in March 2016. Curnows Hut remains open to walkers. Much of te land in the former Bundaleer Forest has been transferred to private ownership. The property on which the hut is located remains on Crown Land as paet of the Bundaleer Greenway. 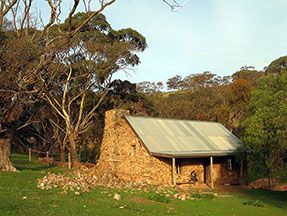 Interactive Map of the Heysen Trail