My sister has compiled a family tree about our ancestors and although all of them had led fairly interesting lives, the most interesting was William Henry Thomas. William Henry had come to Australia from Cornwall in 1848. He worked at Burra and the Victorian goldfields and then in 1857, with his brother James, became the first lease holder of Umberatana Station. In their day it consisted of 188 square miles of semi- arid land in the North Flinders Ranges, west of Arkaroola. 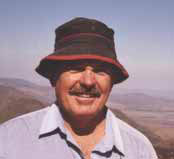 They had driven cattle to the property and, as was the custom of the time, became the first leaseholders. They had bad luck as the area soon became subject to drought, and after four years they were forced to sell to Thomas Elder and the subsequent overseer, a Mr. Stuckey. Stuckey over-grazed the property, the results of which are still visible today.

As a result of an article I wrote for the Trailwalker, Neil Field, a descendant of James, contacted me and we set a date, the Queen’s Birthday long weekend, to make the pilgrimage to Umberatana and, in my case, to climb Mount Thomas, “the family Mountain”. Not many people have a mountain in the family. In Neil’s case there is also Mount John Roberts.

On a wet Saturday morning we set out on our expedition. We were to spend the night at the Copley pub and make our way to Umberatana on Sunday morning. The previous days’ rain had marked the end of a particularly dry period. In some places there had been considerable rain. But, according to the Weather Bureau, most of the rain had been south of Blinman, some seventy kilometres to the south of our destination. 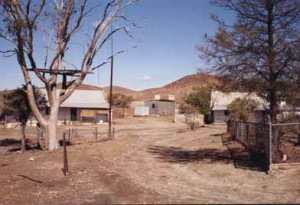 Our first port of call was Quorn where, by chance, we met up with the “Friends of the Heysen Trail” End to End 1 walkers. After a quick g’day we were off to Copley arriving at about 2:00 pm. There were lots of puddles in the main street and on the highway into the town. Having had nothing to eat since we left home we made a beeline for the famous Copley Bakery. The Copley pasty I enjoyed was a little expensive but still yummy. After lunch we ventured to the local garage to enquire about the road to Umberatana and if we had listened to this bloke we should have turned around and gone home. The impression given was it was not possible even by four-wheel drive. We asked a few more people, in both Copley and Leigh Creek, and those who knew suggested we could make it if we drove slowly.

After this encouragement we went to book into the Copley “Leigh Creek” pub. I had some trepidation but was happy with what turned out to be the best SA country pub I have stayed in, and I have stayed in quite a few. After settling in, we went for a walk around town, a walk that was interrupted by a little Aboriginal kid flicking stones at an old car with the aid of a hand-made contraption, and a long talk over the fence with a bloke who was sitting with his family around a pit fire in his back yard. My wife doesn’t think this is a good idea for our back yard. It was this chap who said the drive to Umberatana was OK if taken slowly, and his advice was correct. The third highlight of the walk around town was a fellow in his front yard with a rifle looking for the hawk which was scaring his canaries. Three things you don’t usually see in the city.

During a delightful meal at the pub, a bloke’s wife apologised for him turning up in thongs; my suggestion that he buy us a beer as compensation wasn’t followed up. After this we watched a bit of television and went off to bed.

Next morning we were up early, leaving at nine after advising the hotel proprietor of our intentions, and suggesting that if we weren’t back by the following morning we would need rescuing. The morning was clear and sunny with the road from Copley to Angepena Station turnoff good except for a few water hazards. The road to Umberatana goes past Mount Searle Station which is now an Aboriginal settlement. Nearly to the station we met an aboriginal kid in a white Commodore, with his front tooth knocked out, who advised us of a bit of mud not far along the road. He was right, but the mud wasn’t too bad, considering they had had 40mm of rain in the past three days. The kid also advised us that a grader had recently been along the road which meant it would probably be in good condition all the way to Umberatana, which it was except for several water and mud obstacles. The heavy rain was unusual for this area. Last year all they had was 200mm and that was mostly in summer.

The scenery in the North Flinders is beautiful and this trip was no exception as we headed to Oweindana Station. In one of my previous walks in this area we walked this road only to turn right at this point and walk up the Arcoona creek. On this trip, however, we continued along the road to Yankanina Station. The chap in Copley warned us that the hills out here were like a moonscape and he was right, for Yankanina has been over-grazed and there is little, if any, vegetation. The Yankanina Homestead has been left to fall down, which is a shame because it is still quite a nice building. All in all, Yankanina is quite a disaster area of neglect. Soon we were passing through the gate to Umberatana Station and the condition of the landscape immediately improved.

Umberatana Homestead is a very pretty collection of stone buildings, some of them painted white. Manager Fred Stone came out to meet us. Fred is about 35 and was the only person we saw on the station. After a long talk we headed off to the airstrip and to Mount Thomas. This short trip was almost too much for the Magna and so, fearing I might rip the bottom out, I called the drive off at the airstrip, and my climbing of Mount Thomas was put on hold. At the airstrip there were some eagles feeding on a kangaroo carcass. This reminded me of the road trip up here, where we were able to get up close and personal to other eagles feeding on road kill. An interesting observation with the eagles is how many different shades of brown they have amongst their feathers, from dark brown to almost yellow on their breast. This kangaroo however may have been brought down by a dingo for there was the body of a dead dingo nearby. It was interesting to note that the tail was left untouched. This animal behaviour may be responsible for the delicacy, Kangaroo Tail Soup.

After taking a few photographs of the airstrip and surrounding hills, especially Mount Thomas (with its obligatory radio mast) in the distance, we headed back to the homestead to take more photographs of the view the Thomas boys would have enjoyed 150 years ago. Fred came to see us off and get a few details about our history. He also said we could stay out there next time if we gave him fair warning, which, if I am to climb Mt Thomas, is a must. The trip back was a little faster, a highlight being the sighting of a very healthy dingo on the road. He should be healthy because he has good food laid on with all those sheep running around. He only has to stay off the road and not get too greedy to enjoy a long life.

We were soon onto the Arkaroola road but had to stop because we were heading into the setting sun and visibility was almost nil. I went to investigate a dead kangaroo. His skeleton indicated that he had probably died of a broken foot after getting caught on the top wire of the nearby fence. This just indicates how fragile life in the wild is.

After sundown we continued on to Copley and after thanking the chap with the fire pit, (he was doing the same again), we retired to the pub for another lovely meal and bed.

Next morning we were up bright and early to get an early start. As we were loading up the car, a cold front went through with its rolling clouds but there was no rain. I later learned that this cold front went as far north as Mount Isa. On the way back we stopped at the road house in Hawker to find that the red- headed bloke who had fixed my tyre on the Anzac Day trip remembered our previous encounter. I told him I had written about him and would get a copy of that particular Trailwalker sent to him.

The trip back included a stop off at Ororoo to visit my cousin Wendy and her husband Warren. After inspecting their son Bronte’s WW11 jeep that he is restoring, and listening to their daughter Annika play the piano, it was back to the big smoke. Near Clare we had a tour of Skillogallee Creek, an area that the Thomas boy’s father had owned after he came back from the Victorian Goldfields.