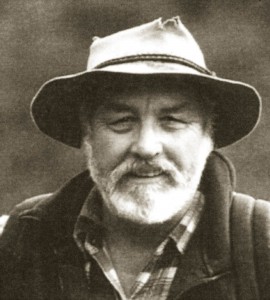 After the construction of the Heysen Trail, Terry eventually left Recreation SA to run his own walking company, Lavenders Trailmaster. He introduced thousands of people is the joys of bushwalking, leading walks throughout the state.

Hr also continued his love of writing, producing several guides and maps to the Heysen Trail, including The Last Post (or how to build the Heysen Trail in 400 years or less), Strolling South Australia (written in conjunction with his great walking mate Derek Whitelock) and two volumes of The Heysen Trail: A Walker’s Guide. His books and maps are the bible for walkers tackling the trail. 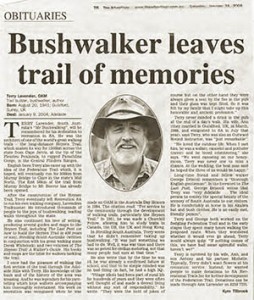 I once had the pleasure of walking the first section of the trail through the Adelaide Hills with Terry. His knowledge of the bush and of the history of the area was amazing. And he was legendary for his yarn- telling which kept walkers accompanying him thoroughly entertained. His work on recreation was recognised when he was made an OAM in the Australia Day Honours in 1994. The Citation read “For service to the community through the development of walking trails, particularly the Heysen Trail”. In 1991, he was made a Churchill Fellow, allowing him to study trails in Canada, the US, the UK and Hong Kong.

In Strolling South Australia, Terry wrote that he didn’t remember taking up bushwalking. “It was just something we had to do. Well, it was war time and there was no petrol for civilian motoring, not that many people had cars at that time.”

He also wrote that by the time he was 10, he was already a confirmed failure at school, and that to be simple minded was no bad thing (in fact, he had a high IQ).

“Village idiots had been part of rural life for hundreds of years and they were often well thought of and made a decent living without any sort of responsibility”, he wrote. “They were the butt of jokes of course but on the other hand they were always given a seat by the fire in the pub and their glass was kept filled. So it was felt by my family that I might take up this honorable and ancient profession.”

Terry never minded a drink in the pub at the end of a day’s walk. His wife, Ann (they married in Guildford, UK in March, 1969, and emigrated to SA in July that year), says Terry, who was also an Outward Bound instructor, was “just remarkable”.

He loved the outdoor life. When I met him, he was a walker, canoeist and potholer (caver) and he loved orienteering

“He loved the outdoor life. When I met him, he was a walker, canoeist and potholer (caver) and he loved orienteering” she says. “We went canoeing on our honeymoon. Terry was never one to miss a chance. At the wedding, the best man said he hoped the three of us would be happy”.

Long-time friend and fellow walker George Driscoll remembers a “thorough English gentleman”. In the foreword to The Last Post, George Driscoll writes that Terry was “very Adelaide…The ideal person to convey the special beauty of the scenery of South Australia to our visitors. He is comfortably at home in his Akubra hat and bush clothes. He is an easily met, friendly person”.

Terry and George both worked on the fledgling Federation Trail and in the early stages they spent many hours walking the proposed route. When they wondered whether it would ever go ahead, Terry would always quip: “If nothing comes of this, we have had some splendid walks, haven’t we?’

Terry is survived by his wife, Ann, and son Antony and his partner Michelle. Typically, Terry didn’t want flowers at his cremation service. Instead, he wanted people to make donations to SA Recreational Trails
Inc for further development of the Federation Trail. Donations can be made through Ann Lavender on 8258 7785.

David has contributed greatly to the activities of the Friends. After joining he quickly became a Walk Leader and a Council Member, a role he continues in to this time. 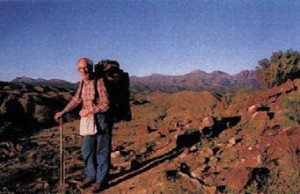 Walking past the Heysen Ranges