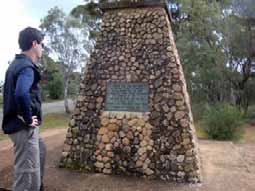 Simon Cameron and the Eyre Memorial at Crystal Brook

As a staging post, this site’s history long precedes the town which was established in the 1870s. South Australia’s early explorers were attracted by the clear flowing creek which gave the town its settler name. Edward John Eyre, who began his SA career overlanding stock from the eastern states, had a good eye for water and named the Brook in 1839. In 1840 he came back here to marshall his expedition to explore the north of the state, bringing supplies up the gulf. From this site he pushed on to Mt Arden, establishing another depot at its foot. The Heysen Trail follows in his footsteps along its Flinders traverse.

Balked by the northern salt lakes and despairing of the waterless panorama he named the vestigial hill of the range Mt Hopeless and turned his face toward the west.

From this site he pushed on to Mt Arden, establishing another depot at its foot. The Heysen Trail follows in his footsteps along its Flinders traverse.

The monument sits on the banks of the Crystal Brook, 100 metres from the trail, established by a centenary committee. Solid and substantial it heralds the first European assault on the mighty Flinders Ranges – an endeavour that our intrepid Heysen walkers continue to this day. Every walker should touch it in homage to the start of the next northern adventure, after the long westward journey from Burra.