To restrict the written acreage to a minimum I will relate only topics and details of a general nature instead of giving a day by day account of the entire saga. 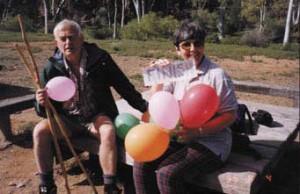 Total distance 1036 km. (This is a conservative figure as measured on a flat map surface and makes no allowance for such matters as track meandering in stream beds and variations in terrain elevation)

The effort was spread over three years:

We only carried large packs on six days, those being 1 – 4, Cape Jervis to Newland Head Conservation Park,and 52 & 53, Wonoka to Moralana Scenic Drive.

For the remaining 51 days we each carried a small day pack only.

This last mentioned walk was on Wednesday 26th July 1995 when almost the whole of South Australia was experiencing very nasty weather.

At precisely 1.40 pm on this day we passed east abeam the radio masts on top of Mount Arden, and the hail was coming at us horizontally. 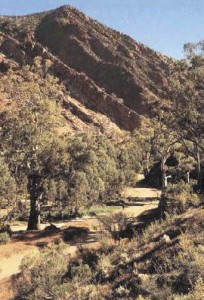 The trail notes on the reverse of Heysen Trail map no. 14 say, inter alia, ‘Despite the rigour of the walk, rewards are enormous. As the trail begins to gain height the views become more and more extensive until on the summit of Mt. Arden the countryside for hundreds of kilometres around in all directions can be seen’.

Codswallop! On this particular day visibility was down, on occasions to 50 metes or less but the bit about the walk being rigorous’ was spot on.

By this stage of the game we were both wet through and had been for several hours.To make matters worse, the uppers of my left boot decided there and then to part company with the sole. Lack of scenic views did not seem important somehow.

I called to mind the entry I had seen in a visitor’s book on the Pascoe property near Yapoona Springs, which we had passed back on day 42.

The entry was in the remarks’ column and merely said “I want my daddy.” I could now relate to that.

The last day, 57. was a short stroll of some 17km from Aroona to Parachilna Gorge and was completed on my 57th birthday, Friday 4th August 1995. She that must be obeyed is two years my senior and she climbed over the last stile on the Trail at 11.30 am that

morning. This day also marked the 95th birthday of the Queen Mother but, as was the case in previous years, she did not bother to ring me.

She may have known that I was out.

Each day whenever possible we commenced walking at first light and this mainly for two reasons:

We each carried a walking stick which over rough terrain can act as a RoIf Harris extra leg. We both found them especially helpful when negotiating the narrow tracks around the cliff edges to the east of Cape Jervis. Ours were not elaborate. expensive affairs but merely rough straight sections cut from scrubland on a fnends property at Paris Creek. Jean’s stick was from strong but very lightweighted stringy bark and mine was of heavier and more sturdy wattle.

Another item of innumerable uses is a large plastic garbage bag cut open so as to form a flat sheet. We each carried one of the lightweight items and found them very useful as groundsheets to sit on, shelters from the elements etc.

Our day packs also contained a face cloth and a small light and very water absorbent towel. We found these very handy on day 54 when approaching Wilpena we were obliged to remove our boots and socks to wade through the icy cold water that,at the time, was flowing as a wide stream across the Trail at This location. I fear that I have now placed myself in the predicament where I may be attempting ‘to teach granny to suck eggs’ so I will desist forthwith.

With the exception of two days (42 and 49) my wife Jean carried a video camera with her so that we now have a video record of most of our journey. From this material she has produced a film of just under four hours duration and this she has given to the ‘Friends’, It is quite disjointed and amateurish but may help to give would-be walkers some idea of the terrain and trail markings they are likely
to encounter if they decide to tackle the Heyson Trail. I made notes every walking day from which I have now compiled a more comprehensive write-up. Once this has been typed and placed in a more presentable format I will forward a copy to the ‘Friends’. Jean and I wish to stress that neither viewing nor reading is compulsory.

We were very fortunate when walking the northern section of the Trail to have the assistance of our good friends and neighbours Bill and Margaret Scott. Using my 4WD vehicle they would drop us off in the morning and collect us again at a prearranged time and place later in the day, thus they were able to keep a SAR watch over us (SAR = search and rescue). Not only that, they cooked our evening meal for us each day.

I must say with honesty that the walk was a most rewarding and satisfying venture. It is also true to say that we had our occasional frustrating moments. No navigator worth his salt will ever admit to being lost, he is merely temporarily uncertain of his position. Well in the dim distant past I was a flight navigator and must concede that during our long stroll I was on a very few occasions temporarily uncertain of my position. Sometimes vandalism of markers was to blame, at other times poor or non- existent marking was the cause of our problems, but for the most part it was our own inability to correctly assimilate all the information that was presented to us. Fortunately we quickly learned from our mistakes.

I would like to take this opportunity to thank sincerely all those responsible for the initiation and preservation of this wonderful state asset, the Heysen Trail.

Back to the title for a moment. What Cicero probably said was, “I’m glad that’s over.” I can relate to that too. 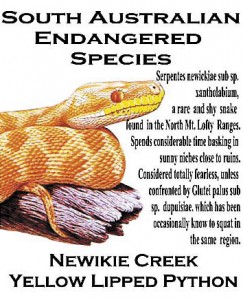 I remember viewing the reptile exhibit of the Detroit Zoo shortly before coming to Australia. Essential ‘snake facts’ reminded me that the greatest population and variety of poisonous snakes on earth could be found in Australia. OK...let’s rethink this plan. Sure, we have bears and mountain lions around the place, but I’ve managed to live a relatively active outdoor life for 35 years without so much as a claw mark.