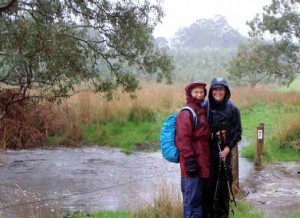 We learned about walking this way after completing a long distance walk with Auswalk in January of this year, which lets us walk for a longer than usual distance without the weight of the full pack.

We made contact with Simon from Victor Harbor Taxis at Victor Harbor. What a diamond we found in him and I wanted to share with others the help Simon gave us and for others who were interested (especially interstate and international walkers) to make the Heysen Trail walk easier on the back Simon has done a considerable amount of the Heysen Trail and was helpful in our planning. He understands walkers and their needs. He has great local knowledge as well as the requirements of walkers. What better ally could a walker want!

Our original plan was somewhat changed when on the reaching ‘the end of Tunkalilla Beach’ we spent 1½ hours looking for the marker to exit the beach! So exhausted after this adventure, then climbing that very big hill and looking forward to camp at Balquhidder West, and then discovering it was nothing more than a driveway into a property without any flat ground to pitch a tent, we decided that exiting a couple of days earlier on full packs might be the answer. We climbed the hill to get a phone signal and Simon, our knight in shining armour collected us from the campsite, dropped us at the Colonial Inn in Victor Harbor 2 days earlier than the original plan and we lapped up the luxury of a shower, a bed and a non camp meal that evening.

Simon picked us up the next morning, delivering us back to the point of pick up last night and we walked back to Waitpinga. Simon continued this great shuttle service for the next two days while we made our way to Victor Harbor.

Leaving Victor Harbor, Simon dropped us back on the track and continued on delivering our main packs to Rattley’s at Pear Tree Hollow at Inman Valley, where we discovered another diamond of the Heysen Trail. Bruce from Rattley’s picked us up in the driving rain and hail where the track meets the road about 5 km from his bed and breakfast facility.

We were so glad to see SA get some much needed rain, and at times it made our adventure much more than a simple walking adventure!

Rattley’s is a beautiful bed and breakfast cottage at Inman Valley and the hosts Bruce and Fay were sensational catering to our every need. Being unable to secure accommodation for one night only at Myponga, we spent 2 nights with Bruce and Fay, with Bruce picking us up from Myponga and giving us a guided tour of the area before arriving back at the cottage. What amazing service!

Bruce dropped us back at Myponga the next day and at no cost moved our main packs to Mt. Compass. Our great knight in shining armour, Simon, met with us again moving our main packs from Mt. Compass to Villa Grenache at McLaren Flat. The terrible weather ensured there would be no outdoor camping for us; if it wasn’t flooded it was soggy and with no shelter anywhere to be dry or even cook a small meal, we opted for luxury instead of the original plan! We were so glad to see SA get some much needed rain, and at times it made our adventure much more than a simple walking adventure! We did wonder at this point what the Deep Creek crossing was like. We had crossed it a week earlier, knee deep and running fast and after the days of deluge how the crossing would be for any walkers out there at that point! 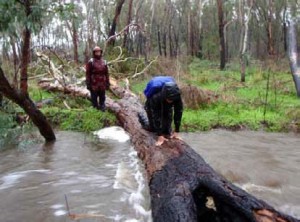 Colin from Villa Grenache met us at the Kuitpo HQ and we spent the afternoon enjoying McLaren Vale and some more great hospitality from SA. Colin took us back to Kuitpo the next day and did not charge us for the extra running around; another diamond of the Heysen. Our experience of tourism operators in the Fleurieu area has been nothing short of sensational.

Simon, our amazing knight from Victor Harbor arranged for our taxi service for moving our gear to change to Mt. Barker taxis as they were much closer than Victor Harbor from here on. We felt some sadness at this change, as Simon had been such an inspiration and Mr. Amazing to us and we knew we would miss his smiley face, trail knowledge and inspiration. But Mt. Barker taxis continued to do the great job that Simon had started, providing great pickups for us and our gear.

Our next section was to Mylor and what looked straight forward was anything but as the rain and hail continued to come down. The bridge over troubled water turned out to be the bridge under troubled water! Then what appeared as simple creek crossings over the roads, turned out to be 5 metre wide, raging waters and unknown depth crossings, requiring some alternative routes to be found. After much searching we found a sizeable secure log to crawl over on all fours and after negotiating our way back to the track discovered we had to cross the same creek again 100 metres further on.

After some serious bush bashing through blackberry bushes we eventually found a narrow enough crossing (still depth unknown, but deeper than trek poles) and built our own bridge and then found the kangaroo crossing under the fence to get back on to the track. But alas, the day’s adventure was not over yet. Now, there was some serious gun fire very close to the track and despite our yelling out, it continued. We were glad to finally have the track turn away from the firing and then discovered a few kilometres later that this was a police firing range area. It would have been great to know that earlier! Hint: put in a sign at the other end of the firing range that it exists.We finally arrived in Mylor looking like very bedraggled drowned rats and our wet weather gear looking like it would never look dry again.

Our accommodation that night was at Binnowee B & B, where we again experienced great SA hospitality. Our packs were there waiting for us, kindly dropped there during the day by Mt. Barker Taxis. Binnowee has an upmarket side and for those on a budget, there is a converted shed, which was simply sensational and we highly recommend it. Very comfortable, our wet gear dried and the breakfast was fantastic.

The next day saw glimpses of sunshine as we made our way to Mt. Lofty and a luxurious night at Mt. Lofty House. Despite the bad reports we had about this facility, our experience was sensational; food and service were both great. Our packs had again been delivered by Mt. Barker Taxis and we left them there for pick up the next day on the way to picking us up from Moores Road. The original plan was to meet the taxi and swap packs, but the weather had been so unkind, and there being no shelter at the campsites, we made a plan B.

We again experienced a different than planned adventure for the day, as we discovered the track was closed and

not a sign anywhere to offer a different route for the long distance walkers. Relying on the maps we found our way to Moores Road, however, were in a different spot than the prearranged place the taxi was to meet us. As with all things pre-arranged there is, of course, always concern of what happens if it doesn’t work to the plan. We were able to get a phone signal out to tell them we had arrived, but were closer than the pre-arranged place. The taxi arrived and said he couldn’t see us. Alas, there is a gate on the road, not marked on the map and we had to walk a little way to meet him. Just another adventure! Hint: get the gate marked on the map.

Our driver then took us to Cudlee Creek Caravan Park where we would spend the last two nights of our trip.

Mt. Barker Taxis duly arrived on time the next morning, to drop us back at Moores Road and we continued to walk our way back to Cudlee Creek.

What an awesome adventure we had. But, the adventure would not have been the same without the amazing diamonds we discovered. Simon, from Victor Harbor/Peninsula Taxis, experienced Heysen walker and taxi service provider extraordinaire; Bruce, host numero uno of the Fleurieu; Colin, host outstanding in McLaren Flat and the Mt. Barker taxi service. We were welcomed everywhere we went, and questioned about our sanity walking in such conditions, but we would repeat it in a heartbeat and will hopefully be back next year for the next 250 kms and see what adventures that will bring.