Early one evening, Wynen household, phone rings.
Peter W: Hi there, Peter Wynen speaking
Colin E: Hi there Peter, how would you like to come away on a trip to check out the huts, shelters, toilets, tanks, platforms etc on the northern parts of the Heysen Trail. There is some maintenance to be done and I am trying to get a crew together to help out.
Peter W: I would love to help out, BUT I am the world’s worst handyman.
Colin E: You can handle a broom can’t you? I’ll email the details to you.

… and on that understanding I became part of a 4-man crew that met at Cobblers Creek at 8:30am on Saturday 20th January ready to hook up the Friends of the Heysen Trail trailer to the car we would be traveling in. Present were Colin Edwards, Julian Monfries, John Quinn and me.

After checking we had all we needed in the trailer, we hooked it up and were off …. well nearly. We had hooked the trailer up inside the shed, pretty close to the door, but inside the shed nevertheless. We only needed another inch or two to clear the side of the door. After half a dozen attempts to get that two inches by reversing and forwarding, defeat was declared, we unhooked the trailer, wheeled it forward through the door and rehooked it to the car…and we were off…again.

We arrived at Quorn in time to interrupt the caravan park managers’ lunch break and checked into our cabin a couple of hours earlier than we would normally be permitted.

We unhooked the trailer and headed off for the first of many sites to inspect – Waukerie Creek. We drove along a rough 4WD track as far as we dared while still able to turn the vehicle around, scaring a herd of goats on the way, then got out and walked about 500m to the tank and shelter – listening for any sounds of gunfire that indicated feral control that we knew was occurring in the area.

No work required here – tank about 75% full. Back to the car – next stop Dutchmans Stern. This is a large hut with two inside, flushing toilets. Here we removed a few cobwebs and gave the hut and toilets a good clean.

The plan for tomorrow was to visit the tank at Eyre Depot (quite a long drive) and take a short cut back through Thompson’s Gap to the next site after getting permission and instructions from the local landowner as to how to do that. A phone call established that he was actually in Adelaide until Monday – this necessitated a change in the plan. The revised plan was for Colin, Julian and me to visit those 2 sites in June as part of End to End 5 – a group we belong to.

The rest of the afternoon we inspected and tidied the tank and platform at Buckaringa North and the tank and toilet at Calabrinda. Both tanks were at about 50%.

The day started with a long drive to the northern extremity of the trail – Parachilna Gorge. At the trailhead there is a tank and platforms which are accessible from the road. This tank had a leaking tap (“it always leaks”) and was about 75% full. There is another tank about 500m down the trail accessible only by walkers. This was about 50% full.

We had arrived at around 10am – it was nice to see the gorge in morning light for a change. 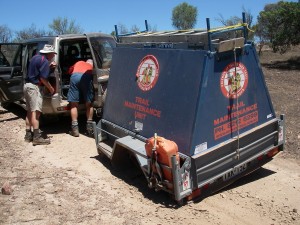 Our next site was Middlesight Hut. This involved traveling a couple of kms up a rough 4wd track off of Brachina Gorge. We stayed long enough to check the gutter, remove a small termite mound that had formed in the fireplace, removed cobwebs and gave a sweep.

The next site was Yanyanna Hut. This is about 20km further down the rough 4wd track. Shortly after climbing out of a small dry creek crossing, a loud “clunk” was heard from the rear, followed by an exclamation from Julian of “Oh, oh. We have just lost a wheel!” Yes indeed – the left hand wheel had come off of the trailer and was just coming to rest about 10m away in the bush. I knew immediately that my “broom-handling skills” were not going to be of much use.

The ball-bearing casing had disintegrated. This trailer was not going anywhere until we were able to replace it. We abandoned the trailer and took what was left of the ball-bearing casing. We would see if the servo in Hawker could do anything for us when we got there. It was now 1pm. We continued on to Yanyanna Hut and gave it a good going over before having a break here for lunch. The tank here was only about 10% full.

After lunch we continued on the track that took us out to Bunyeroo Valley Rd and back to the main highway. Colin needed to speak to the people at Arkaba Station about Red Range campsite which is on their property. After a brief stop there, we arrived at Hawker at around 3:15pm. We left Colin to discuss wheel issues with John Teague at the service station, while Julian, John and I headed off to Mayo Hut, a short distance away. The tank here was full.

We were back in Hawker at 4:45 – in time to see a new ball-bearing casing arrive. The solution to our problem involved not only a new casing, but a new wheel as well (something to do with studs not fitting, and I heard mention of 13” and 14” – well outside a broom-handling technician’s understanding).

We arrived back in Quorn just before 6, confident that the wheel problem was now fixed.

Packed up and left Quorn at 7:30. We had to stop off at the servo in Hawker on the way through to the abandoned trailer (they needed to grease the ball-bearing casing). The trailer was fixed and hooked back onto the car by 11am. We drove slowly into Wilpena Pound where we needed to check out reports of trail-marking being confusing around the campground area. 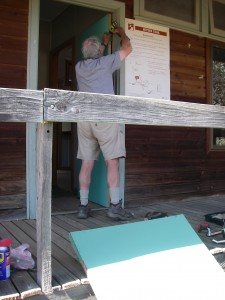 The next major undertaking was to replace a door at Bowmans Park (Crystal Brook) and some alsynite roof sheets at Hiskeys Hut (Georgetown). The plan was to visit Hiskeys Hut and see what was required, then travel to Crystal Brook, book into the caravan park there and then measure the door at Bowmans Park ready to buy a new door in the morning (today being a public holiday). We visited Mt Elm on the way to Georgetown. The tank here was about 90% full. The greening committee had planted trees at Hiskeys, so the opportunity was taken to inspect these also.

We checked into the caravan park at Crystal Brook, then drove to Laura for tea – being a public holiday meant that there were no eateries open in Crystal Brook. On the way back, we visited Bowman Park to measure the door. Another drama almost unfolded when it became apparent that we did not have a key that fitted any of the padlocks to the gate. After contemplating the matter for 5 minutes or so, the broom-handling technician inspected the problem and was able to resolve the matter by simply sliding the chain over the top of the post – I derived some satisfaction from this.

We were at the hardware store waiting for it to open. They had a door, but did not have any alsynite of the right size. While Colin fitted the door, I had the task of cleaning the hut, gutters, toilet etc., while John and Julian remarked the trail in the area. The door proved to be a problem to hang, the lock proved to be an even bigger problem to install. By 2:45 the jobs were done.

We called into Georgetown for the alsynite, then fixed the roof at Hiskeys hut. It was now 3:30pm. The remaining sites were in the Burra area, so we headed off to Paxtons in Burra for the night.

First stop today was Wandallah. A quick clean up of the shelter, then off to Blackjack…..BUT a brief inspection of the trailer before leaving revealed that the electrical coupling to the trailer had not been connected for some unknown time. This was now not working properly. Still, we had to continue …..BUT we were now getting a strange warning light appearing on the dash: re-connecting the damaged electrical coupling had blown one of the car’s fuses. After a read of the manual and a bit of fiddling in the fuse box we fixed that little problem and decided to visit Black Jack shelter before returning to Burra, and have the plug replaced.

We had a choice of roads between Wandallah and Black Jack – one long and one short, but with lots of gates. We chose the short. While driving through one of the gates, our gate-opener noticed an unusual noise coming from the trailer wheel. A brief inspection revealed that another set of adjustments needed to be made to the recently fitted bearing case. Not an issue, but lucky to have picked it up.

Back to Burra for the new plug, coffee and lunch, then a visit to the final 3 tank sites on the way home – Burra Gorge, Webb Gap and Smiths Hill, before arriving home to a familiar comfortable bed – mine!