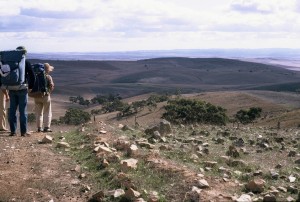 The ownership and management of the Bundaleer and Wirrabara Forests may soon change, following the Mid North Forests Future Strategy which commenced after the devastating bushfires of 2013 and 2014.

Submit your feedback via yoursay.sa.gov.au/greenways by COB Monday 12 June 2017.

Response from the Friends of the Heysen Trail

I refer to an email received by the Friends of the Heysen Trail on 17 May 2017 seeking submissions in response to proposals by the SA Government about changes in relation to Wirrabara and Bundaleer Forests in the mid-north of South Australia. Your response date: 12 June 2017.

The email indicates that the Department of Primary Industries and Regions SA (PIRSA), has been leading development of a ‘Mid North Forests Future Strategy’ to determine the future for Bundaleer, Wirrabara, Leighton and Yarcowie Forest Reserves since the 2013 and 2014 bushfires. PIRSA indicates that as this process ends, ownership and management of Bundaleer and Wirrabara Forests may soon change.

This is the first communication on this matter received by our organisation and as a primary stakeholder it is of some concern that consultation has not occurred in the development phase. The Friends have considerable experience and knowledge that would have contributed to formulating reasonable options.

I note the communication makes reference to protection of the Heysen Trail as follows:

“To address community concerns, and ensure the significant recreational trails which pass through these iconic forests continue to be protected and enjoyed, the State Government is proposing to use provisions under the Recreational Greenways Act 2000 to create a greenway over sections of the Heysen and Mawson Trails within Wirrabara and Bundaleer Forests that are proposed to be sold to private parties.

Using these provisions, the State Government will be able to protect the Heysen and Mawson Trail networks for recreational access in perpetuity for use by walkers and/or cyclists”.

Friends of The Heysen Trail

The Friends of the Heysen Trail (FOHT) was established in 1986 as a voluntary organisation committed to maintain and promote the 1200km Heysen Trail as an iconic walking trail. It has more than 1000 members with hundreds volunteering time to undertake trail maintenance, lead walking groups, plant trees and encourage awareness of the Heysen Trail. It works collaboratively in a long- standing partnership with the Department of Environment Water and Natural Resources (DEWNR) to ensure that the Heysen Trail remains an important element of attracting walking and associated tourism benefits to regional areas.

In 2015 the SA Government launched its Nature Like Nowhere Else tourism strategy that specifically seeks to encourage and expand “standout walking journeys across the landscape”. FOHT is contributing to this process through participation in public forums and consultation led by the SA Tourism Commission and DEWNR to further extend linkages between walking and tourism.

1. Response to Proposal to Use Greenways Act 2000

FOHT welcomes and supports that aspect of the proposal that aims to protect the Heysen Trail (and Mawson Trail) through enacting the Greenways Act 2000: this is an essential process that will ensure public access continues in perpetuity for this long-established and internationally recognised walking trail.

FOHT believes it would also be an enhancement to link the Heysen Trail, via protected spur trails, with other smaller loop trails in the local area as alluded to in the document. This would offer an added benefit for families and others preferring shorter walks to participate in nature-based activity and enjoy the surrounding environment. The addition of spur trails is also consistent with discussions between FOHT and Northern Forest Community Initiative Group in relation to retention and improvement to walking trails in Bundaleer Forest.

Supported: proposal to use the Greenways Act to protect the Heysen Trail.

2. Response To Proposal Re Bundaleer

The outline and map suggest that an existing section of the Heysen Trail from Curnow’s Hut along Campbell Range and New Campbell Hill (approximately 5-6km) is to be removed. The map contains an alternative route that may consist of up to 12km including what appears to be road walking.

It is of concern to FOHT that the proposal includes a significant change to the current route of the Heysen Trail which is inconsistent with the stated principle of “protecting” the trail. It is also difficult to understand why this change is being contemplated given that the documentation fails to provide any reasons or identifies problems with the current route.

This aspect of the proposal is not supported as it will be detrimental to the amenity and enjoyment of a highlight of that section of trail which provides bush walking with panoramic views across the Spencer Gulf from New Campbell Hill. The alternative route option would diminish the opportunity to appreciate the expansive landscape across that part of SA and also add additional distance along roadways not currently a feature of that particular section of the trail. Given the SA Government nature-based strategy includes “standout walking journeys across the landscape”, FOHT strongly suggests that the existing trail route is retained and protected.

Not Supported: proposed change to the Heysen Trail route.

3. Response to Proposal re Wirrabara

FOHT supports the concept of a Greenway over the current route of the Heysen Trail as outlined and looks forward to consultation as to any specific requirements to ensure that the Greenway reflects the existing Heysen Trail in the northern part of the forest which the advice indicates ‘may not be retained in Government ownership’.

While it is not directly part of the Heysen Trail, FOHT welcomes the proposal to extend a greenway through to Ippinitchie campground as a general benefit to walkers and other nature-based users.

Friends of the Heysen Trail officers are available should you wish to discuss aspects of this response further.

Yours sincerely
Melanie Sjoberg
President
Friends of the Heysen Trail